Enjoying an Easter rally at Turre, near Mojácar in Spain 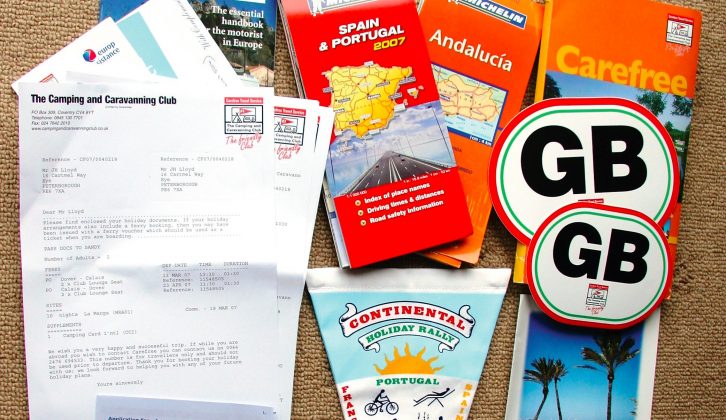 The major clubs will offer advice for those on tour, but a good road map is still worth carrying A collection of just a few of our Gentleman Jack’s many rally pennants! Rally activities are many and varied – this included a craft class Rallies aren’t always sedate: you could take on other motorcaravanners at boules, for example!

Most of us hanker after some warm and bright days during the depths of a British winter. And fortunately, a motorhome provides the ideal way to achieve this.

The Mediterranean coast of Spain and Portugal have traditionally been the most popular destination for motorcaravanners in search of some low-season sun. But Morocco, the Balearic Islands, the south of France and Cyprus are all gaining in popularity.

Motorcaravanning winter-warmers can be divided into two distinct types: the traditional two- or three-week annual holiday, and the long stays, when folk remain abroad for anything from one to six months. The shorter breaks are usually chosen by those still working, longer ones by the retired, semi-retired or seasonal workers.

Top-facility campsites in Spain and Portugal frequently have a much shorter season than those in the UK, so don’t expect there to be the same amount of choice as there is in the summer.

That said, those that are open all year usually offer substantial discounts on their already much-reduced winter pitch fees for longer stays. These start at around 10% for seven nights, climbing to beyond 40% for 30 nights or longer.

When I first went to Spain off-season, it was in a Bedford CA Dormobile and General Franco was in charge. Since then, Spain and Portugal have changed out of all recognition. Both are now modern, vibrant countries with a much improved infrastructure.

Despite that, a surprising amount of the coast around the southern Iberian Peninsula remains wild and unspoilt. And it is destined to remain so because its rugged terrain, steep cliffs and/or saltwater marshes effectively prevent the spread of the concrete jungles.

Which type of holiday?

Many winter-sun rallies are run by clubs. Most of these are managed by voluntary stewards, and any member wishing to join in can do so!

These rallies provide a safe and secure environment, companionship, and help and advice from stewards who are always highly experienced European travellers.

Organised activities can include walks, bike rides, boules matches, craft sessions, themed nights in function rooms, dinner dances and activities arranged by the site itself – these might be coach trips to places of interest, local festivals or even language lessons.

In addition, many organise special meals and entertainment over Christmas, New Year, Easter and for local festivals. There are no on-site press gangs or even an expectation for ralliers to attend all or any of these activities. (Note that rallies over Christmas and New Year fill-up quickly, so book early.)

In addition to European rallies organised by clubs based in the UK, the Motor Caravanners’ Club has a membership section for Brits living in Spain. They arrange weekend, five-night and longer holiday meets at which all members are welcome.

Also growing in popularity are off-season European escorted tours – they are arranged by clubs or commercial organisations, and a small(ish) group of travellers stay in their own ’vans. Frequently these tours are themed, and the leaders are experts in a particular discipline or region.

Escorted tours outside Europe are usually arranged around a fly/hire package.

Motorcaravanners are by nature nomadic – more so than our trailer-caravan friends – so sooner or later the appeal of the open road without a fixed itinerary becomes impossible to resist.

As mentioned, sites offer discounts to long-stayers, and this can mean that a touring holiday will cost much more in site fees than a static one. However, it doesn’t have to.

Organisations such as Camping Cheque and ACSI offer discounts on single-night stays, and there is an ever-increasing selection of aires and farms that you can stay on.

In addition, some commercial organisations in Spain and Portugal – such as the Portuguese Orbitur group of sites – allow a long-stay discount to be accumulated for those visiting several different sites, as well as those staying put at one location.

Why not mix and match? We do, usually spending some time touring. We stay longer at our favourite haunts, and also join a club rally at some point.

Preparing for your tour

Be sure to do your research – look online, visit libraries and talk to fellow motorcaravanners. Both of the major clubs and lots of other tourist organisations have a wealth of information available for free.

Be aware that, as well as vehicle breakdown and accident insurance, you will need to check your home-insurance policy to ensure that it allows you to be away for an extended period.

If you are likely to travel abroad frequently and/or for extended periods, it makes financial sense to take out annual breakdown cover. Our breakdown insurance is European-wide and in force all year.

Motorcaravanners are nomadic, so sooner or later the appeal of the open road becomes impossible to resist Driving south for the winter Stay at the best aires for ski holidays in your motorhome