Panel van conversions are the most popular type of project Auto-Sleepers grew from a DIY project 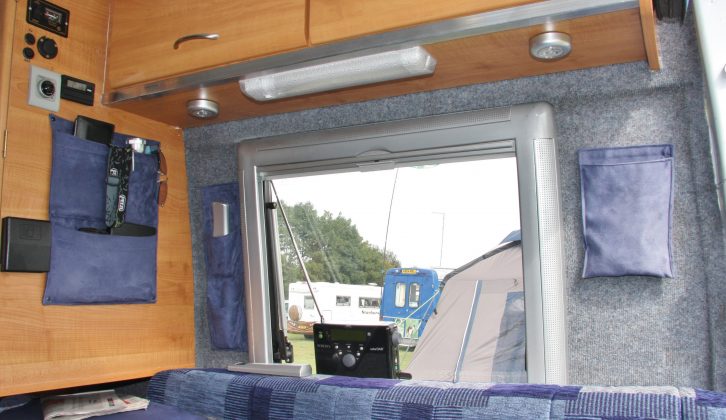 The furniture in this dismountable pod was entirely handcrafted This hatchback permits storage for a microcar, kayaks, bikes or even scaffold planks Behind the cab you can add automotive belted seats If you’re installing high-top moulding, you may need a steel frame around the aperture Before conversion the van was filled with fuel and weighed Heavy kitchen appliances must be positioned well; there is no problem in this MOD truck This frame is for a seat/bed; but stronger structures are needed for travel seats Strict regulations apply to gas installations; don’t attempt it yourself Fitting Seitz S4 framed windows can be a DIY job, or you can get a good workshop to do it If you can’t source products like this, small converters will often supply parts Installing a compressor fridge is straightforward; a three-way fridge is more involved This owner wanted a hob, grill, fridge and good worktop, but no oven This ‘van even has an approved fire extinguisher, correctly mounted away from the hob Although hundreds of motorhomes are on sale, a surprising number of enthusiasts decide to convert ’vans on their own.

The reasons for this are many and varied. For some it’s a way to enjoy cheap motorhome ownership. Others are eager to create their own bespoke holiday vehicle with features that are truly unique.

Oddly enough, it isn’t always acknowledged that several well-known manufacturers can trace their origins back to self-built project vans. For example, the enthusiast (Calverley Trevelyan) who created the Auto-Sleepers brand began his commercial operation after successfully converting a panel van into a holiday vehicle for his family. The Elddis enterprise similarly grew out of Siddle Cook’s home-built caravans. In fact, several DIY efforts have been sufficiently successful to inspire their creators to establish van-conversion companies.

This is important to remember because motorhome self-builders are sometimes unfairly dismissed by sceptical critics.

Recognising that many types of motorhome were being constructed by enthusiasts, an organisation was formed in the 1990s called the Self Build Motor Caravanners’ Club (SBMCC). In addition to its website and member services, the club holds get-togethers around the country; its highlight, the Summer Festival, is held every August Bank Holiday.

I’ve attended many of these events and have been amazed to see the diverse range of vehicles that SBMCC members have constructed. If any potential DIY converter wants inspiration, take a look at some of their projects.

Many examples of self-build projects are chronicled on the forum of the SBMCC website. To see photos of the ’vans, go to the forum’s gallery page.

Wise DIY builders do not attempt to construct everything themselves.

Let’s face facts: we all have different practical skills and, while some people are able to carry out all kinds of work, others have more limited capabilities.

For my part, I enjoy GRP work, cabinet-making and simple electrical installations but have virtually no experience of welding, upholstery work or diesel engine repairs.

Any self-builder whose intention is to construct a safe and successful motorhome that complies with the many legislative requirements needs to carry out an honest self-appraisal of his or her talents.

It’s also important to recognise that work in some areas, such as the gas supply system and its associated appliances, must be entrusted to an appropriately qualified specialist.

Taking these points into account, the wise self-builder then seeks advice and secures the services of anyone who has skills that  they lack themselves.

Not surprisingly, many self-builders also want to include special – and often unusual – features in their finished vehicles. If these are quirky, who cares? As mentioned already, the great thing about self-building is that the builder can incorporate features that motorhome manufacturers don’t offer to clients.

One irony is that manufacturers sometimes adopt ideas that self-builders have fitted before. For instance on my own coachbuilt model, I wanted to build a rear hatchback door for loading equipment and an elevating, high-level made-up double bed. This was completed around 2003 and guess what Swift introduced last year? It was named the Rio 340 and incorporates both of these features. You can read Practical Motorhome‘s Swift Rio 340 review here.

So let’s take a look at some self-built interiors.

Just as professionally built motorhomes have to comply with automotive and habitation safety requirements, self-built vehicles must also comply with official directives.

Unfortunately, some self-builders claim that they observe all safety issues but it may later transpire that key safety concerns were overlooked. So let’s take three issues as examples.

In some basic conversions, it’s not unusual for an old touring caravan to be mounted on the rear of a truck. What most converters fail to recognise is that standard windows fitted in a caravan are fit for purpose when it’s parked on a site. However, they are usually unsuitable in a vehicle that carries passengers in its habitation area when travelling on roads.

Another issue arises when a high top or elevating roof is fitted to a panel van. Some installers may appear to disregard the vehicle manufacturer’s prescriptions when the original strengthening cross members are removed. Typically, a purpose-made steel frame should be fitted around the cut aperture as explained in a commercial van’s literature regarding conversion work. That’s because a high-top GRP moulding is unlikely to provide the rigidity previously afforded by the roof’s cross members.

Weight limits are another crucial safety issue that some self-builders ignore.

Panel vans and other light commercial vehicles have a maximum permitted weight limit together with additional load-bearing limits for the front and back axles – as indicated on their weight-limit plates.

With that in mind, it’s extremely important that anyone planning to build a motorhome precedes construction work by checking the base vehicle’s starting weight on a weighbridge. The results are printed on a form issued by the operator. The builder can then deduct these figures from the plated limits. This reveals two things:

Buying a used van to convert

To keep costs low, most self-builders undertake conversions using a pre-owned vehicle – but finding a good one can be difficult. Some light commercial vehicles are in a poor state and mileages can be enormous.

If you simply can’t find what you want, be aware that some small scale ’van builders also convert pre-owned models and often track-down pre-owned vehicles for DIY clients. Several of these specialists carry out ‘part builds’ and modify a base vehicle to suit your requirements. They also supply components that you’ll need for some jobs that you want to undertake. Examples include Middlesex Motorhomes in Edgware and Young Conversions in Bletchley. I visited Young Conversions recently and you can watch the video here. There are many other helpful van converters that will work with you on your self-build.

There are also decisions to make about appliances. Will you want a three-way fridge (gas/230V/12V) or a compressor type that runs on a 12V supply? Do you want a large cooker which professional manufacturers often fit as standard? Have you got the time, money and determination to produce a motorhome whose finish is as good as a factory product?

Take a look at the carousel of photographs, above, to see examples of what’s possible, a selection of individual design features that work, some safety notes and more.

This brief summary only mentions a few of the many issues related to self-building projects. Having built three types of motorhome and taken hundreds of photos of work in progress, I have written books to help builders. So if you’re interested in van conversions, coachbuilts, major renovation projects, or additional guidance on points mentioned here, have a look at Build Your Own Motorcaravan (2013), John Wickersham, Haynes Publishing.

Wise DIY builders do not attempt to construct everything themselves