Launching an A-class is a first for Roller Team in the UK, and this Pegaso 740 is a four-berth with a fixed rear island bed The Pegaso’s interior is well finished and of good build quality, and the washroom is in the middle The Pegaso has a well equipped L-shaped kitchen, with an oven and fridge-freezer, and a microwave opposite The new Trigano 680 has twin beds with plenty of storage 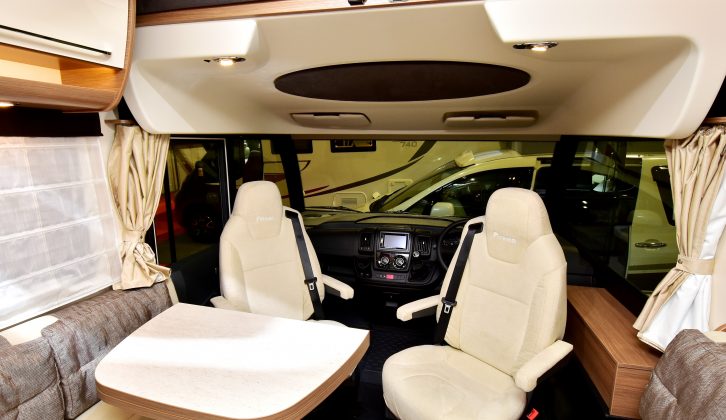 Another small van converter, The Rockin Vans, provides novel hooks that you can attach to dry your hand towels in the sun The premier destination for Scottish caravan and motorhome buyers each year is The Scottish Caravan, Motorhome & Holiday Home Show, at Glasgow’s SECC exhibition centre, and this year it was held from 4-7 February 2016.

Several 2016 motorhomes made their UK debut in Glasgow – weeks in advance of Birmingham’s NEC Caravan, Camping & Motorhome Show, in the last week of February. All the major manufacturers were well represented as well as a few small Scottish converters, who also use this show as a shop window.

BC Motorhomes, the large Scottish dealership that sponsored the show, unveiled the new Roller Team Pegaso 740 – making first public appearance in the UK. This is the first A-class motorhome for Roller Team in Britain and it’s built on a Fiat Ducato 2.3 130 bhp chassis.

The Pegaso 740 has a rear fixed island bed, with a garage beneath it, while the washroom is in the middle and has a separate shower compartment. There’s also a well equipped L-shaped kitchen and an L-shaped dinette. A double bed drops down from the front cab’s roof. The Pegaso is well equipped and beautifully finished, offering good value for less than £58,000.

Also on the BC Motorhomes stand, there was a new Trigano 680 twin-bed van conversion, based on the Fiat Ducato. As well as its pair of rear single beds, the 680 boasts a large side washroom and side kitchen, complete with an oven and grill. Storage for two is ample, and the 680 is competitively priced at £38,500.

Motorhome dealership Dickinson’s of Perth attracted much attention by displaying the NU Venture Micro coachbuilt motorhome for the first time in Scotland – which resulted in two sales. The other ‘exclusive’ on the stand was the new Rapido Itineo FB600 – a four-berth rear fixed bed A-class motorhome, based on a Fiat chassis. The Itineo FB600’s front dinette sits beneath an electrically operated drop-down double bed. The side kitchen comes with an oven/grill and fridge, while its corner washroom has a separate shower. The new Itineo FB600 is priced at £49,500 offering good value for money for a compact A-class motorhome.

Roseisle Motorhome dealers showed the new Westfalia Joker City panel van for the first time in its full UK spec, after the left-hand drive version was launched in Britain at the NEC Motorhome & Caravan Show in October 2015.

The other show-stoppers came from two Scottish converters, both established around four years ago, converting mainly Volkswagen T5 and T6 vans into campers.

Caledonia Camper & Conversions had two VW-based campervans on display. First was the new Caledonia Silver, a campervan with a contemporary interior and a rock n roll settee bed made from stainless-steel. It has been fully tested to comply with UK regulations and we were pleased to see that it has a good quality interior and excellent LED lighting. The company also will convert vans to customers’ exact specifications, and the firm also runs a hire fleet.

Another small Scottish maker, Kilmarnock-based Rockin’ Vans had some innovative ideas on their two VW-based models such as hooks that fitted to the side to hang towels on and even a loo roll! The firm also displayed a novel side-fitted shower/changing booth, which clips onto the side of the campervan. Rockin’ Vans’ new Grey Camper model also had a pair of swivel cab seats and an L-shaped side kitchen. Rockin’ Vans is happy to do bespoke van conversions to suit customers and is also a campervan hire firm.

Perthshire Caravans and Motorhomes was showcasing its Platinum range of dealer specials, based on the Elddis Autoquest.

The Scottish Caravan, Motorhome & Holiday Home Show proved to be a superb opportunity for motorhome buyers looking to change to a 2016 model.

Several 2016 motorhomes made their UK debut in Glasgow – weeks in advance of Birmingham's NEC Caravan, Camping and Motorhome Show