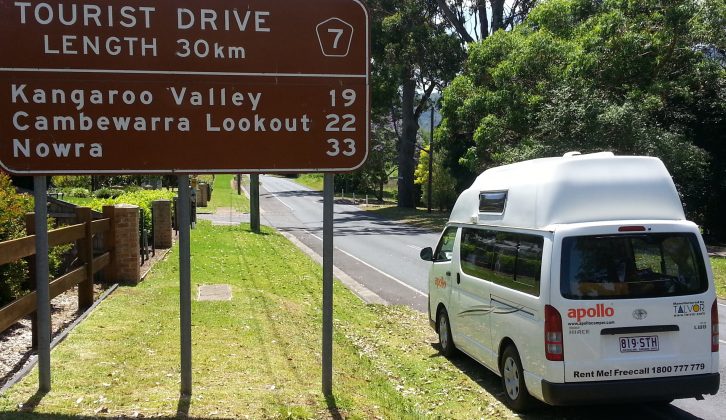 Campervan hire has, so far, been the perfect first motorcaravanning experience for Bob A quick drink in the Jamberoo Pub broke the morning up, before hitting the road Just a half, of course, there’s still some driving to do Welcome to the next part of my Down Under diary, charting the exploits of us motorhome newbies on our travels during a week-long road trip in Australia. Previously, we’ve shared the experience of choosing a campervan hire company and getting aquainted with our diminutive motorhome, before then hitting the road. Now feeling at home in our Toyota, on a beachfront pitch, it’s time for day three and what I think is the perfect start to the day.

It’s 8am and 25C under a cloudless blue sky. A stone’s throw from our Hilux Hitop is a wide arc of golden sand fronting a sparkling surf. It is all completely deserted; our Aussie neighbours at Easts Beach Holiday Park in Kiama are all far too busy barbecuing their breakfast to go for a swim. Mugs!

For such a large campsite with so many facilities, Easts has proven to be a surprise hit with us, and not just for its proximity to that wonderfully clean and safe beach. However, we are adamant that tonight we want more bush than beach. And fewer neighbours. Without knowing quite where we will find that, we decide we will have to leave early and give ourselves plenty of time for exploring – after all, that is the joy of motorcaravanning.

But not so early that we can’t look around Kiama first. This historic seaside town is definitely worth a visit. There’s time for a walk and a coffee (Australians are obsessed by coffee) and a detour via Jamberoo, a 15-minute drive away through rolling green dairy country. A swift half in the Jamberoo Pub is a must. Then we’re back on the highway south, destination Kangaroo Valley.

The turn-off comes after only about half an hour. Result! Enjoying bowling along in the Hilux and drinking in the views though we are, we are adamant that we want to keep the driving to a minimum.

The road to Kangaroo Valley is a gem. It cuts through lush green countryside, more English than Australian at first sight, with mile after mile of twists and turns. The road is wide, smooth and, in early December, virtually empty. Our Toyota Hilux campervan, which had been so undemanding when the going was flat and straight, struggles a little on the hillier bits, but eventually gets the job done. Hiluxes don’t easily give up.

The town of Kangaroo Valley, and its caravan and camping sites, comes and goes. Well, with a motorhome you’re able to change your mind about where you’re going. We are dreaming of something more remote…

Something like a grassy paddock next to a lake. Surrounded by bushland, with mountains in the distance. With wombats and kangaroos and kookaburras. No lights, no sound – and no one else around.

Where to find such a place? For such a large country there are few spots you can just head off the road and park your ‘van, at least in this highly cultivated bit of Australia.

So as much in desperation (it was starting to get late) as anything, we turn off at a sign that says nothing more than ‘Picnic area’. It doesn’t start well. The rough track takes us past a rubbish dump, through scrubby bush, under power lines and past a power station. After a few more kilometres we were about to turn back when – bingo! There was our rural idyll: vast paddocks next to a lake with more wildlife than people and uninterrupted vistas. And not a swimming pool, cafe or kids’ play area in sight!

The Bendeela Recreation Area might not appear in campsite guides but it’s a corker. The campsite is looked after by the Sydney water authority, with a very light touch. There are standpipes for drinking water, refuse bins, a loo block – and nothing else.

We found a great spot for our Hilux, all by ourselves – apart from the wombat that soon came to say hello. The few other campers around were joined by others (the weekend was approaching and it’s a popular spot for kayaking) but it never got crowded, nor did it get rowdy. It’s a completely unsupervised site; the people who use it look after it. And they do so very well.

Did I mention it’s also completely free? It just goes to show that sometimes the very best places just pop up out of nowhere.

Sometimes the very best places just pop up out of nowhere Wild With Consent launched in Northumberland 12 hidden gems to explore along the Yorkshire Coast