New season updates for Autocruise models include DAB radio in the cabs, revised washroom fittings and a flyscreen at the side entrance door 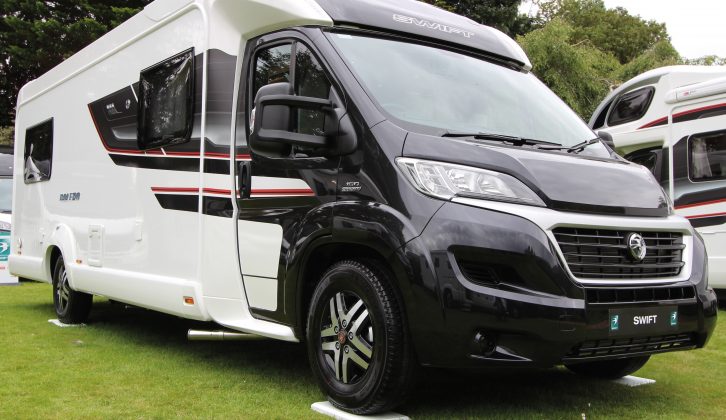 This striking-looking Bolero showcases the range’s 2016 look, the new exterior now with a sunroof, plus a black metallic cab with new graphics Escape, the Swift Group’s budget range, gets new graphics and Truma digital panels for the 2016 season After a successful debut, the Swift Rio returns for 2016, the 325 one of two new models with a conventional layout and no tailgate

Swift Group is the UK’s largest leisure vehicle manufacturer. From its headquarters in Cottingham near Hull it builds motorhomes, caravans and holiday homes, and celebrated its 50th anniversary in 2014. It offers six ranges across two ’van types: Autocruise panel van conversions, plus Escape, Rio, Bessacarr, Bolero and Kon-tiki coachbuilts.

Driven by the transition to new Peugeot Boxer and Fiat Ducato base vehicles, 2015 season updates to the Swift Group portfolio were comprehensive. For 2016, the pace of change has slowed but there are still improvements and refinements, plus new models in various ranges.

Upper mid-range Bolero gets the biggest attention, with a new look inside and out, while 2015 debutant Rio grows by two models. There is also a new floor plan for budget-range Escape, plus upgrades to the classy Kon-tiki. The Esprit has been deleted.

To reflect challenging conditions in the panel van conversion market, Swift has made some nips and tucks to its Autocruise line-up, which goes forward with only the four best-selling models: two-berth rear-lounge Rhythm, three-berth rear-lounge Accent, three-berth fixed-bed Alto and four-berth double-lounge Forte. Interior equipment is boosted by DAB radios in the cabs and a flyscreen for the side entrance door. TV brackets can now be locked while the vehicle is in transit, and washroom fittings have been updated.

Good sales figures of the new Rio compact coachbuilt have seen Swift add two new models to the range. The 310 and 325 join the 320 and 340 but dispense with the eye-catching tailgate that made Rio so unique upon launch. The 310 has a parallel front lounge, midships kitchen and end washroom, while the 325 offers a front dinette and electrically operated rear fixed transverse bed over a garage. A midships kitchen and washroom round off the living space. Other upgrades include the provision of a 100W solar panel.

With Esprit retired after lower than hoped for sales, its more upmarket sibling Bessacarr becomes the flag carrier for Swift’s mid-market ’van offering. In fact, Bessacarr almost outsold Escape last year, so the buying public clearly approved of the improvements to the range for 2015.

Boleros are based on the Fiat Ducato with Al-Ko chassis; the three larger models (714SB, 724FB and 744PR) have 150bhp engines, and the 612EK and 684FB are powered by 130bhp units. All cabs in Bolero get uprated specification, with Techno silver dashboard trim, DAB radio and steering wheel-mounted controls.

On-board technology is upgraded, with new Swift Command control systems. This includes an intelligent power unit and LCD control panel, and data can be monitored remotely (inside the ’van via Bluetooth, or outside via cellular or Wi-Fi networks), via a new Swift Command app.

Flagship range Kon-tiki Black Edition has enjoyed record sales over the past two years, but there are improvements to keep them attractive to buyers. These include new one-piece GRP sidewalls, steering-wheel controls for the DAB radio and Bluetooth devices, ‘Carabu’ soft furnishings, acrylic stone kitchen worktops and underslung sinks, exclusive Dometic ovens and the Swift Command system.

As with the Bolero, Kon-tiki models get the new Swift Command control system with LCD control panel, plus the ability for remote control via the Swift Command app.

All coachbuilts are now built using SMART Plus bodyshell construction. This features three improvements from the original SMART: a new sandwich floor construction with GRP outer skin offers greater weather protection, while outer surfaces are now made from non-hygroscopic (the ability to absorb moisture from the air) materials. Roofs are faced in hail-resistant GRP (with the exception of all Escape models and Bessacarr mid-profile models) and front window jigs are constructed from GRP and foam to create a flatter and stiffer surface to attach the GRP panel and front window to. Coachbuilts get new bike-rack fixing rails and a bike locking point fixed to a rear cross-member.

Autocruise, Escape, Bessacarr and Rio models have new digital panels to control their Truma Combi space and water heaters – this can be upgraded to the remote-control Truma iNet system. All kitchens will benefit from a new design to make the chopping and draining board fit more snugly together.

A new leather and suede-type soft furnishings scheme can be selected as an option in all Swift Group ranges.

Picking one star model from Swift Group’s impressive, popular and varied portfolio is no mean feat, but we’ve gone for the Bolero 744PR. One of the significantly-updated range’s new-for-2016 models, the 744PR features an easy-to-live-with four-berth rear-lounge layout and good kit levels. It also has a front dinette for added flexibility, plus a side kitchen and washroom, and comes on a 4000kg chassis with the more powerful 150bhp engine as standard. We think it is one to watch.

Upper mid-range Bolero gets the biggest attention, with a new look inside and out