Practical Motorhome inside the 2015 Autocruise Accent 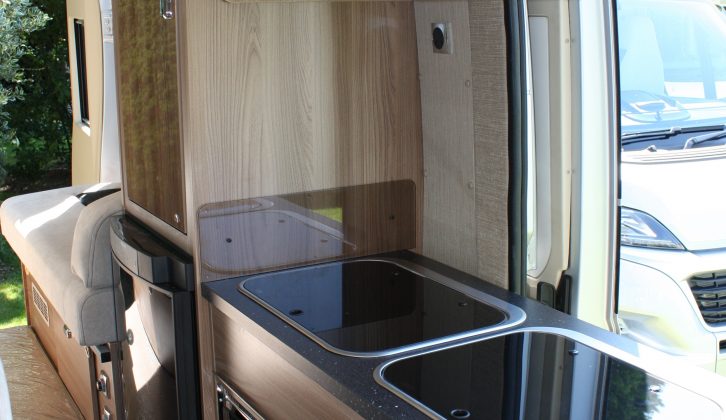 There are new drawers in the Autocruise Accent’s kitchen Ambient lighting can be better controlled in the 2015 Autocruise Rhythm SWIFT GROUP’S POPULAR range of van conversions receive new cabs and a series of improvements for 2015. The Autocruise Jazz has been discontinued, but a new four-berth will join the line-up in February so the model count stays the same, at seven. Prices will rise by 4.3%, taking the price of the Rhythm Compact from £40,860 to £42,616.

The most significant change is, of course, the updated Peugeot Boxer base vehicle, which will be used for all Autocruise models (the first build will be on the new Fiat Ducato, however, with Boxers coming through in late November/early December). The new fronts are metallic silver with matching bumpers and have a sleek appearance. LED daytime running lights and a bold new graphics scheme complete the external look.

The new cabs include a series of improvements, including a new instrument cluster and gearshift indicator. The overall look is more automotive than the outgoing dashboard and definitely ups the ‘wow’ factor.

The Boxer variants are also specified with silver trim, and continue with the central locking box under the centre of the dashboard (the Fiat Ducato has bottle and cup holders). Bluetooth and USB connectivity comes as standard. In common with its stablemates, the Autocruise ’vans get new captains’ chairs for the cabs – these feature an integrated headrest, a wider backrest and better side support.

The living quarters in these motorhomes also benefit from the set of Swift Group-wide improvements. The cabinetwork is finished in the mid-toned Aralie Sen woodgrain, with contrasting gloss oak-effect inlays. This is picked up by the two-tone grey and black soft furnishings scheme, which looks sharp and contemporary. Ambient lighting can now be better controlled, thanks to new dimmable LED spotlights under the lockers, which now have chrome push-button catches.

Elsewhere in the vehicles, kitchen drawers and cupboards have smart white facings, and sinks get a new tap. The travelling seat backrests benefit from a redesign to make them more comfortable and match the new cab seats.

All Autocruise models are European type approved and the Tracker Retrieve tracking system is standard kit. Further reassurance is provided by a three-year bodyshell warranty.

As with the current Autocruise range, an automatic transmission is available as an option on these 2015 models; for this, the buyer has to order a Fiat base vehicle instead of the Peugeot Boxer.

The top-selling Rhythm and Accent layouts continue without modifications, as does the Forte. The sporty Carrera 4 also receives the new cab.

The Alto has been improved for 2015. It has been extended to 6.36m (from 6m), allowing the washroom to be located in the centre, behind the front seat. The rear fixed now folds for better access and a drawer unit has been fitted to the side of the bed.

A new model, the Chorus, arrives in February 2015. It will be 6.36m long, with a front dinette, centre shower and rear bed. The short wheelbase rear corner kitchen Jazz has been discontinued. How to buy motorhomes up to £26k