Inside the Westfalia Jules Verne, where the interior has been finished to a very high standard Roller Team presented its Triaca concept at the German show, its pop-up roof with concertina sides an unusual feature 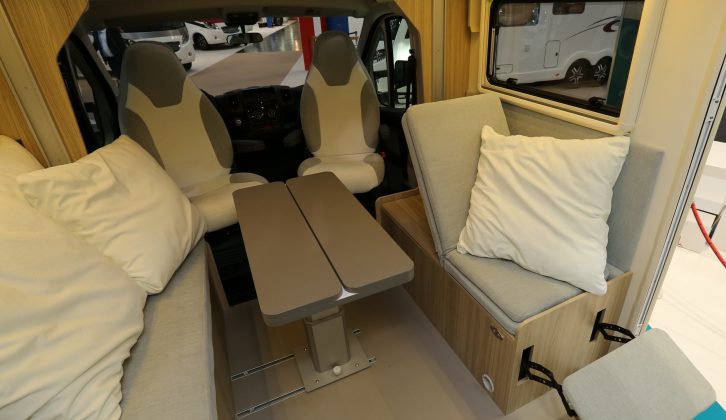 In Roller Team’s Triaca concept, which showcases a range of clever ideas, such as a folding table and pull-out seat base bins

We’ve been reporting all the 2016 news over recent months, but now there’s a chance to have a look at the latest developments yourself as show season begins. In August, our Editor Niall Hampton headed to Düsseldorf to see what the Continental manufacturers are up to, and soon October’s Motorhome and Caravan Show at the NEC Birmingham will give many British buyers the chance to look round the latest, new-season models.

Slide-outs slide into the mainstream in Germany

Could we finally be seeing slide-outs becoming part of the norm among Europe’s volume manufacturers? These space-boosting features have long been popular across the pond on American RVs, but over here have been limited to super-luxury models and a few low-volume manufacturers such as IH Motorhomes and Moto-Trek.

At the Düsseldorf Caravan Salon, however, two of Europe’s biggest names were tempting punters with slide-out rears on their coachbuilt ’vans. Hymer’s offering remains at concept stage, but it was bold enough to build a special exhibit to demonstrate the benefits of the new system, designed in conjunction with Al-Ko and Promobil. Although small – we thought it was around 60cm when fully extended – the slide-out provided a useful boost to lounge space inside the ’van.

Perhaps of more significance was a fully-finished slide-out ’van over on the Adria display. Badged Adria Compact SLS, this neat sub-6m coachbuilt features a longer sliding section, at nearly 1m, but only half-height so that it can retain a large garage beneath. Placing the headboard of the bed into this part of the ’van allows Adria to make much more of the rest of the small coachbuilt’s interior space, plus there was some neat detailing with a built-in awning to combat the slide-out’s notorious propensity to leak!

Vito blooms as a base vehicle

The likes of the Auto-Sleeper Wave, Horizon MCV and Mercedes’ own Marco Polo have already shown what a fine base the new Vito makes for a camper conversion, and this was further reinforced at Düsseldorf by a pair of stylish newcomers. Westfalia already makes the roofs for the Mercedes-Benz in-house conversion, and now it has unveiled its own interpretation, the Jules Verne, which features a front-hinged pop-top and a superb quality interior.

But the ’van that was really creating a buzz among visitors was over on Hymer’s epic display: a concept for a new HymerCar on a Vito base. With an elevating roof and modular furniture, it made for a remarkably spacious interior; combine that with Hymer’s usual quality feel and flair for design, and you have a compelling camper that will surely make it to market.

Roller Team gets its skates on with sporty concept

Another attention-grabbing concept ’van was to be found on the Roller Team stand. The Triaca is a compact coachbuilt with the unusual addition of a pop-up roof with concertina sides, designed to allow the drop-down double to be usable even when the dinette beneath is in use.

And despite its sporty looks, the Triaca also showed off its ‘green’ credentials with a new touchscreen display that allows you to monitor and optimise your energy use. There were some clever storage solutions to be found, too, such as the pull-out seat base bins, the two-piece kitchen drawers and hinged shelves that allow wardrobes to double-up as cupboards.

That flexibility continues in the layout, with nifty details such as a folding and sliding table, and a sofa base that folds up to create a La-Z-Boy-style recliner – ideal for settling down with a book in the evening.

As for its production likelihood, the fact that Roller Team went to the trouble of printing new brochures in English as well as German suggests that this will be more than simply a flash in the pan.

One motorhome that could be welcome in Britain – as it features a very UK-friendly floorplan – is luxury maker Concorde’s Cruiser 890 RRL on Iveco. Packing a simply fabulous rear lounge and a very sociable central kitchen allowing you to chat with your guests as you cook, its commercial appeal in the UK must surely be limited by its rather archaic overcab looks (with the twin/double bed mounted in the overcab). Would things be different, perhaps, if the 890 RRL was an A-class? This was certainly the view of an industry insider we spoke to at the show. The guys at Southdowns Motorhomes Centre are the people to speak to if this ‘van interests you.

As if to prove the appeal of the A-class for the luxury market, Knaus revealed a new flagship in the Sun i 900 LEG – which will almost certainly be available to well-heeled Brits through the UK dealer network, if you’re willing to stump up its €97k price-tag (plus conversion to RHD).

Despite its super-bling appearance, we were rather taken with this new twin-axle Knaus, which features an ultra-opulent interior lined with diamond-stitched leather and glamorous lighting – a liner spec in a large A-class on a Ducato base.

We can’t talk about Düsseldorf, of course, without an honourable mention for the few UK brands who make the trip to Germany. This year, Auto-Sleepers and Lunar returned – the latter under its Continental brand name Cristall – and the Swift Group unveiled a version of the Rio for mainland Europe, featuring a black cab and a rebrand as the ‘Toscana’.

Also taking to the halls was accessories giant Milenco, which was thronged with visitors interested in its new ramps, wing mirror covers and a kit for retrofitting LED daytime running lights.