The revamped E-line/S-Plus has had a number of exterior changes for the new season, including a repositioned windscreen, to provide a better view out 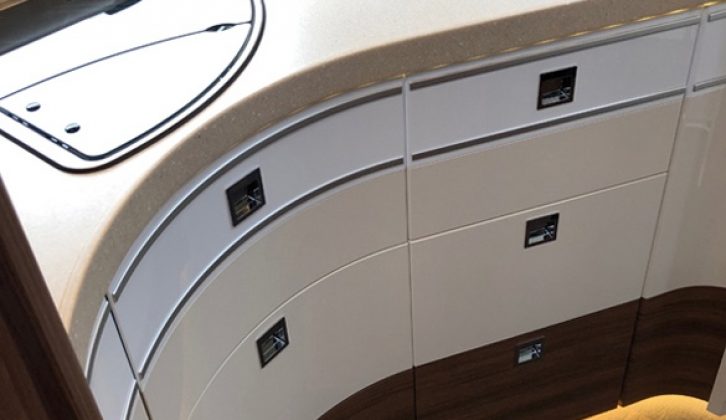 One clever design tweak in the Chic E-Line/S-Plus that will be extremely useful is the electrically operated central locking on the kitchen cupboards and drawers, so they stay closed while you are on the road A notable new feature in the Chic E-Line/S-Plus is the stylish, curvy drinks cabinet in the lounge Carthago’s Liner-For-Two was the cover star of our previous issue – a luxury special – and for good reason. The German brand (which celebrates its 40th birthday in 2019) produces some of the Continent’s most prestigious vehicles.

Last year’s model launch saw fairly extensive changes, so things were a little more restrained this year. However, a couple of special tweaks look like making the brand feel even more exclusive.

Sub-brand Malibu, which offers a touch of Carthago luxury at a slightly smaller price tag, has also received a number of changes and additions.

Starting with the super-lightweight A-class five-model range, the Fiat/Al-Ko based C-Compactline had a fairly significant interior upgrade for 2019, so this year the focus is on the exterior. For 2020, it has been given a more striking radiator grille, indicator lamps and bumper. Perhaps more significant is the the C-Compactline is now around 20kg lighter – all models in this range come in with an MTPLM of 3500kg.

Next up is the 17-strong C-tourer line-up of low-profiles and A-classes, all of which also come in at 3500kg.

Again, changes have been kept fairly restrained; outside, there are new LED daytime running lights and a different side-window arrangement.

More likely to be of interest to buyers are the interior tweaks – bigger TVs in some models, along with smarter tables, and shoe cabinets. In T/I 148 LE and 149 LE models, you also get a solid wooden sliding door to partition the rear bedroom from the washroom.

What’s more, T-model low-profile buyers can now choose to upgrade to a Skyview skylight, and a new, lighter lithium-ion battery is now an option.

Also receiving just a few changes for 2020 is the iconic Liner-For-Two, launched last year and already proving a top-seller in some countries. It’s so new that Carthago has decided to mostly confine its changes to small interior tweaks, including revamped dashboard trim, an optional 360-degree panoramic camera system and an optional lithium-ion battery.

Our favourite change, though, is the addition of a cleverly designed pull-out desk unit behind the cab seats.

In the Chic C-Line range of A-classes and low-profiles, the most significant change is the introduction of the Mercedes-Benz Sprinter as a base vehicle alongside the Fiat Ducato – the sense of luxury it offers is fitting for Carthago.

In addition to the attractive and well-specified cab in the Sprinter, buyers will benefit from the choice of a nine-speed automatic gearbox.

A further innovation is Carthago’s new high-performance headlights with full LED technology, fitted as standard in the ‘Superior’ (S-line).

But it’s the E-line/S-plus that have been given the biggest revamp. Until now, two base vehicles were available in this range: Fiat Ducato/Al-Ko (E-line), and the rear-wheel-drive Iveco Daily (S-Plus). Now, however, the Chic E-line can be purchased on the front-wheel-drive Mercedes-Benz Sprinter with Al-Ko low-frame chassis, which is a good brand fit, given the range’s high-end positioning. Merc-based models range from 8.0-9.0m in length, with an MTPLM of 4.5-5.5 tonnes.

As well as a raft of exterior changes – including a repositioned windscreen for a better view out – there are also those smart new LED headlights, and rear indicators in ‘chaser’ style.

Furnishings have been redesigned for a more modern look; one of the highlights is the stylish drinks cabinet. Lounge seating is more ergonomic, shoe compartments have been added for extra practicality, and electric central locking has been installed in the kitchen drawers, to prevent them from opening in transit.

The Malibu sub-brand has grown over the years to include van conversions, low-profiles and A-classes.

The latter two body types receive few changes for 2020, apart from small design tweaks, the inclusion of a lithium-ion onboard battery, and (on higher-end models) a pull-out room divider/TV wall.

The Malibu van conversion range has a new addition, though: the Fiat Ducato-based Van Charming Coupé. This transverse-rear-bed model offers lots of headroom and interior space, and impressive storage.

OUR PICK – CARTHAGO E-LINE/S-PLUS ON MERCEDES-BENZ

Carthago prides itself on being a manufacturer of luxury vehicles, so the introduction of the Mercedes Sprinter base to the E-Line/S-Plus range is a great fit. The all-new interior of these models oozes quality – and we love the many clever design touches, such as the electrically operated central locking on drawers and cupboards in the kitchen, to stop them opening while you’re on the move.

Sub-brand Malibu, which offers a touch of Carthago luxury at a slightly smaller price tag, has also received a number of changes and additions