This comfortable rear lounge is one of the star features of this Elddis – watch Practical Motorhome TV on Sky 212, Freeview 254 and live online to see more Here we get inside the Auto-Sleeper Corinium FB – ‘FB’ stands for fixed bed, and here it is! 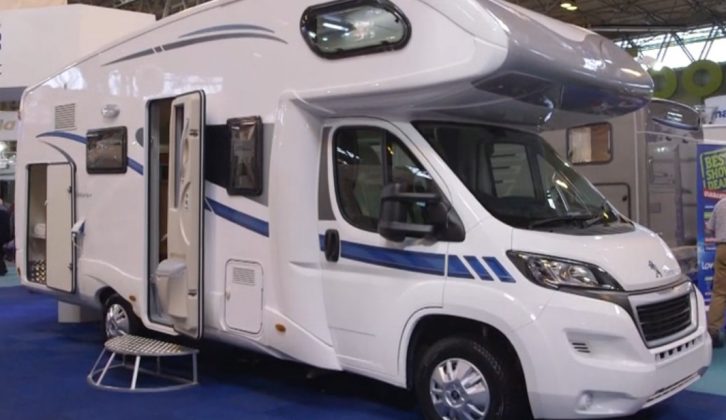 Get inside this Lunar Selena 690B on Practical Motorhome TV – watch on Freeview 254 (if you have a smart TV), on Sky 212 and live online Priced at just under £46,000, the Lunar Selena 690B’s washroom and kitchen are in the centre of the ’van You won’t want to miss the clever, classy washroom in this Weinsberg CaraCompact 600 MEG Watch our brand-new channel on Sky 212, on Freeview 254 or live online, to discover more about this Tribute T-680

Welcome to our first show on the brand-new Practical Motorhome TV! Previously called The Motorhome Channel, we’re back with a new name and a new series, stuffed full of motorcaravanning goodness.

We get this series started with an NEC show special, filmed at February’s Caravan, Camping & Motorhome Show and presented by Practical Motorhome’s Editor Niall Hampton. First in line is the Elddis Autoquest 195 – and if you’re switching from caravanning to motorcaravanning, this could be the ’van for you. It has a caravan-style front lounge with parallel seating and a window on each side and, crucially, features a pair of travel seats – tune in to discover how! There’s a bright and modern kitchen in the middle of the 7.3m-long 195, and a large, comfortable rear lounge, the latter providing the main sleeping quarters in the form of two singles or a large, 6ft 9in-long make-up double (the parallel lounge gives two more berths). The all-in-one offside washroom is compact but clever, and sited in the centre of the ’van, meaning all occupants can visit it at night without disturbing everyone. In fact, it’s so good, Niall thinks this motorhome could be best in show – tune in and see if you agree.

Then we review another Peugeot Boxer-based motorhome, the Auto-Sleeper Corinium FB. Corinium is a new range from Auto-Sleepers and this fixed bed model has a lot going for it. For starters, there’s great space inside. Up front is a parallel lounge, while the kitchen showcases some clever, spacing-saving ideas, and the rear bedroom has a double wardrobe as well as that fixed double bed. And then there is the full-width end washroom, with its stylish sink and good-sized shower cubicle, all for a little under £65,000 OTR.

Next in our NEC show special on Practical Motorhome TV, it’s over to Andy Harris, who’s on the hunt for some unusual motorcaravanning accessories. Watch on Freeview 254, Sky 212 or live online as he looks at Venters trailers, a collapsible dingy and more.

After the break, Niall’s back, chatting to Lee Roberts from Lunar about the firm’s new motorhomes, launched at the NEC. In the coachbuilt Selena range, the two four-berth ’vans have electric drop-down double beds, plus there’s a new entry-level motorhome as the Venus name, familiar from Lunar’s caravan range, is introduced to the firm’s motorcaravan line-up, priced from £36,000. Lee also shared Lunar’s plans for a top-end, Renault Master-based motorhome – tune in to find out more!

Our Lunar Selena 690B review follows. This new-to-market, six-berth, overcab coachbuilt, based on the Peugeot Boxer and priced at just under £46,000, has lovely lounge with a wide, open feel, the surrounding overhead lockers with smart, two-tone doors and handy storage shelves above and below them. At night, this area can be made into a double, plus there’s an overcab double and a pair of transverse bunks across the rear, the lower of which can be raised to allow you to load the motorhome’s large rear garage from either side – clever stuff. There’s also a compact central kitchen and a nearside midships washroom, the latter with a separate shower cubicle – watch Practical Motorhome TV on Sky 212, Freeview 254 or live online and take a look yourself.

You’ll also be able to catch more fun from the NEC show with Andy Harris, from a penny-farthing (yes, really!), to French touring ideas, thermal insulation for ’vans, an extreme, all-terrain motorhome and more.

Finally, Niall has two further ’van reviews, beginning with the Weinsberg CaraCompact 600 MEG, a budget motorhome that feels anything but. From the leather steering wheel and gearstick, to the chrome-ringed dashboard dials and the high-security door lock, it’s sprinkled with high-end features. The kitchen is small but decently-specced, the lounge is comfy and attractively-upholstered, and the washroom is a classy affair with a sliding sink, a swivel toilet and two mirrors. Two fixed single beds at the rear provide the sleeping space. Priced from £42,000, the show ’van comes in at just over £46,000 as a few options boxes have been ticked. Still, we think for an entry-level motorhome, you’re getting a lot for your money here.

Secondly, he looks at the Tribute T-680, a Fiat Ducato-based, 6.36m-long panel van conversion with a 3500kg MTPLM – and it’s another wallet-friendly proposition, starting at just £38,500. But, again, it feels like you’re getting a lot for your money. Slide open the door and you’ll see there’s a half dinette at the front. With its stylish contoured lockers featuring snazzy overhead ambient lights, plus the smart upholstery, it has an upmarket feel, despite having just a campervan-style kitchen with a two-burner hob, a sink, a dual fuel fridge, and a combination oven and grill. There are two single beds at the back, both with storage beneath them, and some clever touches in the washroom. If you’re looking for an affordable panel van conversion, this is well worth some of your time.

So that’s it for our first show on Practical Motorhome TV. With so many ’van reviews, you don’t want to miss it, so be sure to tune in on Sky 212, on Freeview 254 or live online – and we’ll be back next week with a brand-new episode!