As Hymer marks its 60th anniversary, read on to find out what the brand has to offer for the 2018 touring season Inside the Exsis 504, whether you choose the low-profile or the A-class variant, you get a transverse rear bed/front dinette 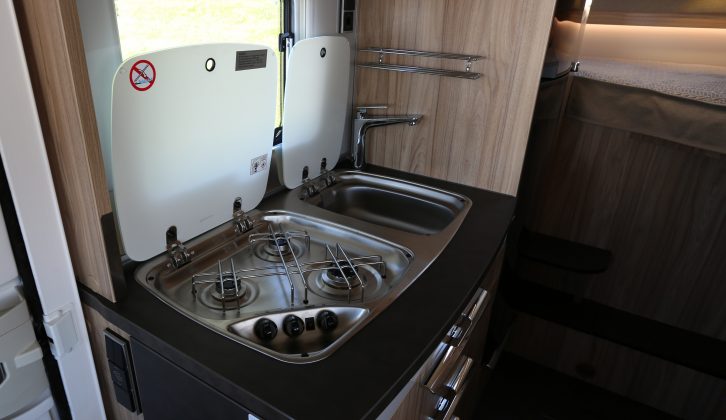 The 588 also has a pair of fixed single beds at the rear, seen here on a Hymer Exsis-i 588 The 678, available in Exsis-i form (as pictured) and Exsis-t, features fixed twin single beds and a front dinette As Hymer is celebrating its 60th anniversary, various special-edition models are available

Given the postwar explosion in outdoor leisure pursuits, leisure vehicle manufacturers are enjoying a peak period for half-century – and greater – anniversaries.

With a reach right across Europe and nowadays far beyond, German giant Hymer needs little introduction, and this venerable producer has much to celebrate as it enters its seventh decade in the industry this year.

Hymer’s 2018 product launch followed on from the unveiling of ‘60 Edition’ special-anniversary models of the Hymer ML-T and Hymermobil ML-I 570 in January and took place in the Erwin Hymer Museum, opposite the company’s headquarters in Bad Waldsee, south-west Germany.

As has been the case at many motorhome launches in Germany in recent years, the assembled leisure vehicle press corps was treated to a glitzy presentation with snazzy visuals and thumping banging tunes that wouldn’t have been out of place on an dancefloor in Ibiza.

Following the presentation of some very impressive financials for the past season, including super-impressive growth for HymerCar camper vans, MD Bernhard Kibler revealed major upgrades to Hymer’s slimline Exsis ranges.

Exsis is Hymer’s mid-market low-weight motorhome offering, available in both A-class (integrated) and low-profile (semi-integrated) forms, and which last received a major refresh six years ago.

Taking its cue from the B-Class DynamicLine, an A-class range with super-low weights that launched early in 2016, the new Exsis gets further weight reductions to make it a compelling offering for those who need their motorhomes to be well under the 3500kg threshold at which anyone with a standard car licence (category B) can drive them.

This may not be a big issue for many motorhome buyers, who will have C1 (the ability to drive vehicles that weigh more than 3500kg) on their driving licences, assuming they passed their driving test before January 1997.

But given that anyone currently aged under 37 has to take a test to add C1 to their standard B entitlement, Hymer sees an opportunity to grow sales in this segment.

The company cites data from Germany’s Caravanning Industry Association (CIVD) suggesting that 84% of all newly registered motorhomes in 2015 had an MTPLM of up to 3500kg – a number that is increasing.

Hymer claims that younger buyers are starting to take up motorcaravanning, and that they need to be able to drive ’vans with a standard car licence. Data collected from our annual Owner Satisfaction Survey isn’t quite so conclusive, for British motorcaravanners at least, but having a sub-3500kg ’van in the family will certainly allow younger members to drive it.

Hymer’s B-Class DynamicLine (B DL in dealer-speak) was a big deal in motorhome design and development: the ’vans were engineered to be much lower in weight but still robust and durable.

From headlight clusters right down to door frames and overhead locker handles, literally all aspects of construction were re-assessed to keep weights low.

Exsis, then, borrows innovations made in the B DL programme and has been relaunched for 2018 to underscore its credentials as the range that according to Hymer first defined the 3000kg category some 10 years ago.

The 2018 iteration sees weights fall further across the board, but without compromising Hymer’s revered build quality, robustness and reliability. Headline features include:

The low MiROs allow the revised Exsis motorhomes to have generous payloads, so that after two or more people, water and gas bottles are on board, users will still have the ability to load between 200 and 300kg of touring equipment – more than enough for camping chairs and tables, an external barbecue, two bicycles and clothing, says Hymer.

No information was given on Hymer’s other lines, but we will update this story when we learn more.