This fabulous timewarp Pontiac ’van sold for £34,500 at the Bonhams Goodwood Revival auction Built by coachbuilding firm Russell’s of Bexhill, this bespoke creation is in excellent condition Baking powder, jam jars and the family’s photo albums were sold, too Powered by a 4.0-litre six-cylinder engine, this motorhome has covered less than 10,000 miles in 80 years Captain Dunn, who commissioned the conversion, contracted polio and required a wheelchair, included in this sale 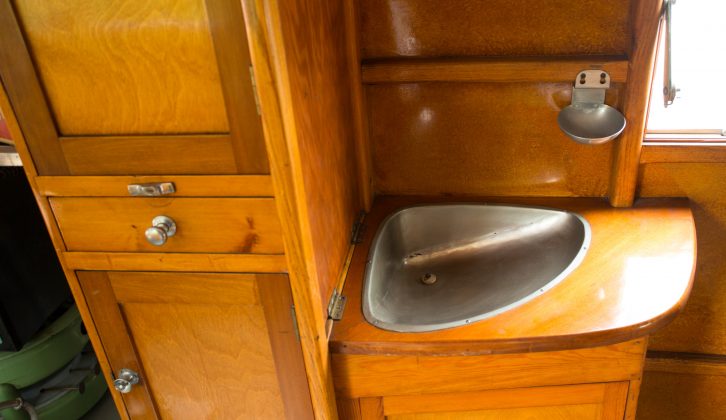 The motorhome’s woodwork has recently been revarnished, but otherwise it is as new Judging by the number of motorhomes packed into the campsites at the 2016 Goodwood Revival, it’s clearly an event that’s popular with motorcaravanners. But you could perhaps be forgiven for missing one very special ’van that went under the hammer at the Revival’s Bonhams auction.

The eye-catching lot 158 certainly drew the crowds – it was a motorhome based on a 4.0-litre 1936 Pontiac Six. Not something you see every day!

It was ordered in 1935 from the USA by Kent-based Captain Dunn through local coachbuilder Russell’s of Bexhill. When it arrived on these shores it was merely a driveable chassis with front wings, a bonnet and a scuttle, which was then painstakingly and, seemingly, expertly transformed by Russell’s into the marvellous and charming ’van you see today.

According to the notes issued prior to the sale, “when he sprayed the wings of this vehicle in hand-flatted cellulose back in the early 1990s, the vendor so admired this perfect panel beating that he did not fill the weld, which remains as it was back in 1936.”

Captain Dunn took delivery of his Pontiac motorhome early in 1936 then embarked on a tour of the south of England. And the winning bidder can look back at these and many more Dunn family holiday memories, as four large photo albums were included in the sale.

Its khaki paintwork was in anticipation of it serving as an ambulance in World War Two, but this never happened, which must contribute to its good condition – it even has its original exhaust.

The woodwork has recently been revarnished, but all fixtures and fittings, including the linoleum and the curtains are original – even the water softener and old tins of jam! You’ll also see a wheelchair, because Captain Dunn fell ill with polio on his honeymoon which left him paralysed.

The motorhome was put into storage in 1940, raised on blocks, spark plugs removed, oil tipped into the cylinder bores, and Mrs Dunn turned the engine over every few months. Captain Dunn died in 1946 and his widow, now the owner, continued regularly turning the engine over on the starting handle until she passed away in 1991.

This stunning, timewarp classic motorhome sold for £34,500 at Bonhams’ Goodwood Revival 2016 sale. Buying a motorhome at auction can sometimes feel like an adventure, but this ’van’s lucky new owner has struck gold!

All fixtures and fittings, including the linoleum and the curtains are original – even the water softener and old tins of jam!