Are motorhome tours to Northern Ireland complete without a trip to Belfast, famous for shipbuilding? 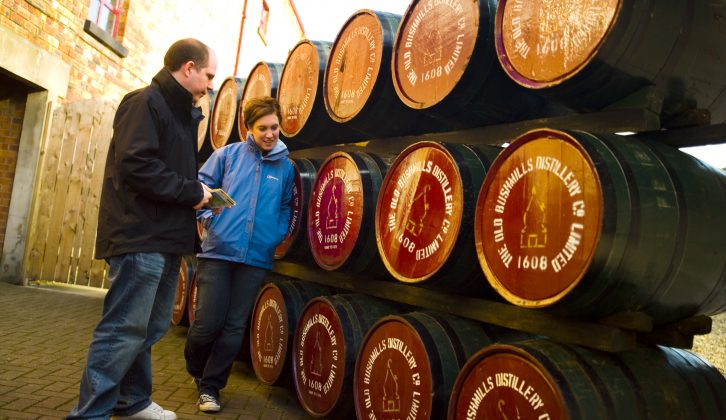 Find out how the Irish make their whiskey at the Bushmills Distillery in County Antrim, when you visit Northern Ireland Explore the shipyard where the ill-fated Titanic was built

Northern Ireland may have hit the news headlines for all the wrong reasons too frequently for anyone to wish for. It goes without saying that the province’s political history, now described as ‘The Troubles’ in history books, dampened enthusiasm for tourist travel. But what were once places to avoid in the latter half of the twentieth century are now cultural highlights on the tourist trail.

Of course, these visitor ‘attractions’ are just one aspect of Northern Ireland to consider when planning a tour of the province. Taking up 15% of the island of Ireland, it’s a land of wonderful countryside where lakes, glens and mountains mingle with historic towns and pretty villages. And all this edged by a spectacular coastline.

Once a part of the historic kingdom of Ulster (you’ll find many references to this kingdom whether in rugby circles, banking or The Ulster Way, a long distance walking trail, Northern Ireland is made up of six counties – Antrim, Fermanagh, Tyrone, Down, Derry and, the smallest, Armagh. Each county is worthy of a visit, and offers something different to its counterparts.

Obvious attractions and places to visit within Northern Ireland include the popular Causeway Coast with the Giant’s Causeway, Ireland’s only UNESCO World Heritage Site; the Titanic quarter of Belfast where the tragic ship was built; film locations for the popular TV production, Game of Thrones and well-known historic houses like Mount Stewart.

But go further than skin deep and you’ll uncover lesser-known parts, like the stunningly beautiful lakeland area of County Fermanagh, the remoteness of the Inishowen peninsula, or the peaceful splendour of the Mourne Mountains, a superb area for walkers and cyclists.

Northern Ireland is a great location for touring, and one of the finest routes is the coastal road between Larne and Cushendall, a part of the 131-mile Causeway Coastal Route between Belfast and Derry.

1.Whether you wish to try a local pint or sip an orange juice, visit The Crown Liquor Saloon, the most famous pub in Belfast. Now owned by the National Trust, the atmospheric building is unique with an incredibly ornate exterior and no less an interior of brightly coloured Victorian tiling, carvings, glass and period gas lighting. Settle in one of the cosy snugs and admire the highly decorative carved ceilings and mosaic work.

2.Visit Bushmills Irish Whiskey, Ireland’s oldest working distillery. There are guided tours around the distillery, where you can see the traditional copper potstills, have tutored whiskey tastings and there’s a specialist whiskey shop.

3.Explore Lough Neagh, the largest freshwater lake in the British Isles. A good starting point is the Lough Neagh Discovery Centre where you can find out about the lake’s international importance for wildlife, take walks and trails through the National Nature Reserve, or enjoy a boat trip around the lake.

4.Take the train from Derry-Londonderry to Coleraine and experience what is considered one of the most beautiful rail journeys in the world. The 45-minute journey begins in the sixth century walled city before sweeping along the edge of Lough Foyle and the beach of Benone Strand. The final leg of the journey is alongside the beautiful River Bann.

5.For a hard-hitting look at the British/Irish conflict, take an award-winning Black Cab Tour of Belfast. A political sightseeing tour, you’ll gain an insight into Belfast during The Troubles, seeing famous hotspots and associated murals.

St Patrick’s Day, of course, is celebrated throughout Ireland in the week leading up to 17 March, but particularly in Downpatrick, the town named after the patron saint. In addition to general revelry, you’ll find pilgrimages, concerts and historical talks.

The Visit Mourne Outdoor Fest held in March, offers spectacular scenery around the Mourne Mountains near Newcastle, County Down for wet and wild outdoor activities.

The City of Derry Jazz and Big Band Festival is held every May with big name stars in the world of music, while Armagh celebrates the Brian Boru Festival in July, when the High King of Ireland won victory over the Vikings at Clontarf in 1014, ending Danish power in Ireland. Cushendall, County Antrim, enjoys the Heart of the Glens Festival for nine days during August, with music, sports and fun for all the family.

And if you happen to be in Belfast during January, take advantage of the annual Out to Lunch Festival. There are three weeks of theatre, music and comedy all served within the lunch hour – with lunch of course! That’s followed by the Cathedral Quarter Arts Festival in April/May.

Care should be taken when visiting certain areas within Belfast on or around the 12 July, when the Orange Order marches take place.

Stena Line operates between Cairnryan and Belfast and Liverpool (Birkenhead) and Belfast. P&O Ferries sail to Larne from Cairnryan.

Visitors travelling from south west and southern England may find it easier to use ferry routes to the Republic of Ireland and use the M1 motorway to Northern Ireland, a two-hour drive. Stena Line has sailings between Fishguard and Rosslare, and Holyhead and Dublin. Irish Ferries operates between Holyhead and Dublin as well as between Pembroke and Rosslare. P&O Ferries travels from Liverpool to Dublin.

Being a part of the UK, passports are not required when travelling to Northern Ireland as a British citizen. It is advisable, however, to have passports to hand along with all vehicle documents in the unlikely event of being stopped by the police.

Northern Ireland is a fabulous region to tour in a motorhome. You’ll find the people incredibly accommodating and relaxed towards motorhome parking in many towns. There are height barriers in some places and the general rule for car parks with marked bays is that a ‘van must fit into a single bay (ie you can’t park over two bays and buy two tickets). But you’ll find plenty of places with specific motorhome parking or simply a large, open car park.

Motorhome users looking for budget options are spoilt with a number of continental style Aires de Service across the province, providing overnight stops and, in most cases, facilities in the form of standard service points. Facilities are being added all the time but currently include Annalong, Ballyclare, Broughshane, Carrickfergus, Donaghadee, Newtownards and Portrush, Whitehead.

And, don’t forget Practical Motorhome’s Top 100 Sites for your motorhome holidays in Northern Ireland. The region always features well in the Awards, as voted for by you. In the 2021 Awards, Rushin House, overlooking the beautiful Lough MacNean in County Fermanagh became the Regional Winner, and not for the first time; it’s a very popular choice.

There are currently no overnight stops in Northern Ireland within the Practical Motorhome Nightstops Scheme, but those travelling on the Fishguard to Rosslare ferry, should bear in mind the Seaview Hotel in Fishguard, which is a part of the scheme and is free to stop overnight if you’re using the hotel facilities.

You can also take a look at our guide to the best motorhome sites in Northern Ireland for more great campsite inspiration.

Public transport for visitors has been well thought out in Northern Ireland. Translink is responsible for bus and rail services within the province, offering a number of value day tickets and integrated travel passes. There are also particular services that are very useful to visitors. For example, the Bus Rambler services are designed to make scenic rural destinations more accessible to sightseers, walkers and cyclists. Routes include the Causeway, Mourne, Kilkeel, Sperrin and Ring of Gullion.

For Belfast, visitors can do little wrong in purchasing a Belfast Visitor Pass. It provides unlimited bus and rail travel for up to 3 consecutive days within the Belfast Visitor Pass Zone and also includes discounts to visitor attractions, shops and restaurants.