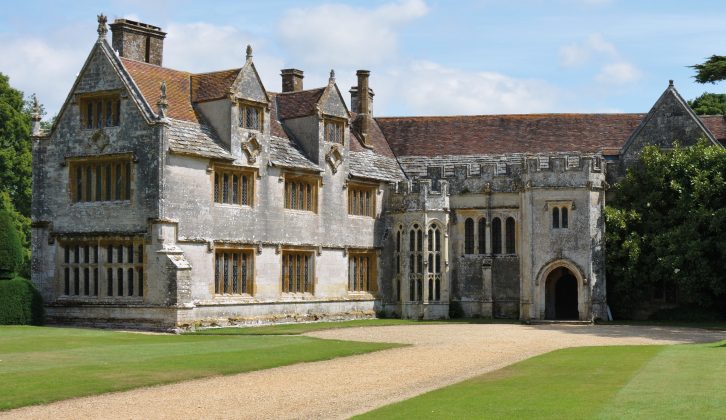 Sleuth was filmed at Athelhampton House As an ardent movie fan, even I was surprised to discover that more than 100 feature films have been shot in the picturesque county of Dorset – ranging in diversity from Cliff Richard’s Summer Holiday to Hollywood blockbusters such as Pearl Harbor and the recent World War Z zombie flick.

Eager to discover many of the significant areas of Dorset whose images have been committed to the realms of cinema history, we headed off in our Autocruise Accent to begin our journey at the south-eastern corner of Dorset, in the cosmopolitan coastal resort of Bournemouth. Interestingly, in the 1920s an American producer exploring Britain for the best site to establish a British Hollywood announced that Bournemouth would be the most suitable spot. Unfortunately, no one had the foresight to pursue the idea and sadly ‘Bournemouthwood’ eventually lost out to Borehamwood.

It was a scorching hot day so we immediately headed to the seafront in search of a cooling sea breeze. Here, perched on the clifftop overlooking the pier, stood the imposing Russell-Cotes Art Gallery & Museum in all its splendour. This exotic villa featured in the film Valentino starring Rudolf Nureyev, where it doubled for his Hollywood mansion, and both the interior and exterior appeared in the film, together with the garden of the neighbouring Royal Bath Hotel.

The Hollywood connection continued as we meandered to the nearby Grove Road, where we discovered the childhood home of actor Stewart Granger. Now the East Cliff Cottage Hotel, a commemorative Blue Plaque on the exterior wall heralds its claim to fame. Born James Stewart (he had to change his name for obvious reasons when he became an actor), Granger went on to be a leading man in Hollywood and made more than 60 films, such as Moonfleet, which was set in Dorset but was actually filmed in California.

Heading west for a Summer Holiday

Bournemouth has an intriguing history and is certainly a town worthy of further exploration, but we had a schedule to follow, so the following morning we continued our voyage of discovery along the coast to Canford Cliffs and the beautiful gardens of Compton Acres.

This 10-acre oasis of five themed gardens has featured in three well known movies, the first being Summer Holiday, in which Cliff Richard is seen dancing with a number of French beauties in a park. The second was a period piece entitled Barry Lyndon starring Ryan O’Neal; and the third was, surprisingly, the Vietnam war movie Full Metal Jacket. Having undergone extensive refurbishment in the past eight years, it is now very difficult to recognise these gardens from the ones that appeared in the films.

After a few hours of soaking up the kaleidoscope of colours and scented aromas, we paused at the on-site cafeteria to refuel. Suitably refreshed, we pointed ‘Blue Boy’ towards Poole Quay, passing Poole Park lake where Norman Wisdom water-skied many years ago in the comedy Bulldog Breed. Sadly, I couldn’t stop myself from striking a Norman Wisdom pose and shouting “Mr Grimsdale!” at a bemused Sandra in the passenger seat.

Bustling Poole Quay, with its abundance of historic buildings, has appeared in a number of films. The most famous is the 1965 production of The Heroes of Telemark starring Kirk Douglas, in which Poole harbour doubled for Norway in a number of scenes. Twelve months earlier, Sean Connery was on the Quay boarding a ship to Majorca in the crime thriller Woman of Straw, which was released in 1964. Again, the area has been modernised, but it is still clearly recognisable in both of these movies.

There is a good selection of superb restaurants along the Quay and we couldn’t think of anything more enjoyable than relaxing on the terrace of one of them that evening, drink in hand, enjoying a great meal while watching the multi-million pound yachts gently edge their way into the marina as the sun slowly sank behind Brownsea Island. Motorhome life doesn’t get any better than this!

After a good night’s sleep we awoke to a chorus of birds welcoming yet another beautiful summer’s day. Back on the road, we headed along the A35 towards Swanage and were transfixed by the magnificent ruins of Corfe Castle emerging over the tree tops. Perched on a hill at the entrance to the village, this impressive stone stronghold was chosen by Disney to star in one of their first live action/cartoon features, Bedknobs and Broomsticks.

Exiting Corfe in the direction of Swanage, we headed inland towards the nearby village of Worth Matravers, and our next location. After a long trek across the fields from the village car park we eventually encountered the imposing Winspit Quarry situated on the clifftop. This wasn’t just any disused quarry; this was a magnificent feat of engineering that you had to explore. More like a mine than an open pit, these man-made caves were worked right up until World War II at which point they were seconded by the military for the duration of the conflict.

These days the rugged rocky landscape resembles an alien planet, and as such Winspit Quarry has appeared in Dr Who, Blake’s 7 and the recent Disney sci-fi adventure John Carter. In the latter, although Dorset is not credited in the closing titles, the quarry appears in the final scenes when a medallion is discovered in a cave.

The sun was slowly sinking over the calm waters of the English Channel and after another busy day hiking across the Dorset countryside we just about made it back to the campsite via the Sandbanks Ferry before collapsing in a heap on the bed. The heat of the day, combined with the mileage we had clocked up on our feet all day, had left us feeling totally exhausted.

We turned Sleuth for more adventures

Up with the larks and raring to go, we set a course north-west to the magnificent Athelhampton House and Gardens, which have appeared in a number of notable films, the most recent being the home of Tolly Oldknow’s Grandmother in From Time To Time with Maggie Smith. It is probably best remembered, though, for its starring role in the Sir Laurence Olivier and Michael Caine Academy Award-nominated thriller, Sleuth.

We spent a relaxing morning just wandering around the grounds.

Martyrs, a massive Maiden and a naked giant

Later in the afternoon, we strolled along the road from Athelhampton House to the pretty village of Tolpuddle. It was here in 1834 that six farm workers formed a trade union led by labourer George Loveless; this fascinating tale is told in full in the Tolpuddle Martyrs Museum. Somewhat bizarrely, the movie Comrades, which detailed the plight of the Martyrs, was shot in Dorset but not at Tolpuddle

After a tasty al-fresco breakfast, on what was turning out to be yet another glorious day, we took a slow, leisurely drive to the county town of Dorchester. Here we trudged up the steep rugged footpath to the huge multiple ramparts of Maiden Castle, which once protected several hundred residents. This historic site, dating back to the 4th century, is among the largest and most complex of Iron Age hillforts in Europe. This was also the setting in Far From the Madding Crowd, where the villainous Sergeant Troy dazzles beautiful Bathsheba with his swordsmanship.

Back in the ’van, we headed inland to Cerne Abbas, which is famous for its Giant – an ancient naked figure sculpted into the hillside above the village. This 180ft tall figure is Britain’s largest chalk hill sculpture and also the most controversial. Many theories surround the giant’s identity. Some say that it is an ancient symbol of spirituality, although local folklore has long held it to be an aid to fertility. Personally, having stared at it for many minutes, I am of the opinion that it is an ancient plumber, because a spanner can be clearly seen tucked in his belt. I could be wrong, though! The village itself is probably best remembered for its appearance in the bawdy 18th-century romp Tom Jones starring Albert Finney and Susan Hampshire.

On the subject of Tom Jones, I’m going through a period at the moment where I think that I’m the singer with the same name, but thankfully the doctor assures me that ‘it’s not unusual’. After that awful joke it was time to head for the green green grass of our campsite as the sun slowly set on the first half of our tour.

That’s all for now, but we’ll be back soon with more film-hunting adventures in Dorset.

We never had a problem parking at any of the Dorset destinations. There were either public car parks or on-street parking suitable for a motorhome available nearby, although in some cases it did involve a long walk to get to the film location. In particular, Winspit Quarry in Worth Matravers involved a demanding three-mile round trip hike from the car park.

Corfe Castle is a National Trust property and has its own car park. In Poole, the Harbourside Park car park at Baiter Park has designated motorhome spaces from 80p an hour, with magnificent views across the harbour.

Parking in Bournemouth is expensive so we parked on the clifftop road between Durley and Alum Chine free of charge and walked along the seafront into town.

Some of the locations are only reached by narrow roads and therefore may be extremely challenging for larger units.

Food and drink in Dorset

You’ll be spoilt for choice when it comes to eating out in Dorset. We can recommend:

For us this was a real bargain break in Dorset. Here are our approximate costs:

Winspit Quarry has appeared in Dr Who, Blake’s 7 and the recent Disney sci-fi adventure John Carter