The Hymer B-Class DynamicLine 588 takes its bow in Munich – note the distinctive headlights, which took two years to design and build The only new layout in the Hymer B-Class DynamicLine range is the 444, a compact two-berth Kitchen space in the Hymer B-Class DynamicLine 444 is very generous – just look at all the preparation space available! 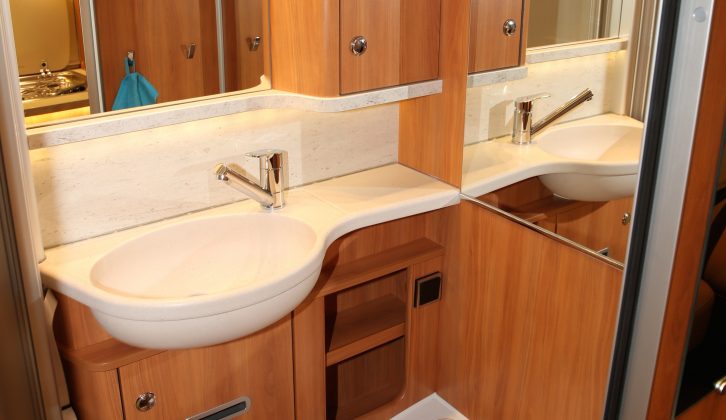 Hymer’s head of design, Frank Venter, used an image of punks in his presentation to show how marginal trends can become mainstream An optional extra on the Hymer B-Class DynamicLine range, this under-floor camera allows the driver to monitor the position of the motorhome’s waste water outlet relative to the service point on the ground

Hymer chose a celebrated film and television studio complex in western Munich to stage its latest motorhome launch. Eisbach Studios has formed the backdrop for many a German film, TV programme and ad campaign, while also providing rehearsal space for some familiar artistes including Joe Cocker, Alicia Keys and the Rolling Stones.

The Bad Waldsee-based behemoth will be hoping that its latest A-class range will go on to have similar international recognition. Launched after an intensive development programme, the B-Class DynamicLine offers buyers top-end touring comfort at weights well below 3500kg.

And the company is so pleased with the outcome that it decided to take the wraps off at a glitzy launch event that wouldn’t have shamed a leading car manufacturer – a sure sign that confidence is well and truly back at Hymer HQ.

Challenging conditions following the 2008 financial crash were eventually eased by key markets like Germany, Scandinavia and the UK bouncing back, allowing successful exporters like Hymer to offset a drop in sales in other territories, especially southern Europe.

But switched-on manufacturers that innovate their way out of downturns are first to be rewarded when good times return, so Hymer has also been busy trying to consolidate and improve its market share in the upper segment.

The new B-Class DynamicLine range has been two years in the making and is full of new innovations. The objective – and unique selling point – of the new line-up is superior comfort below the 3500kg MTPLM threshold at which you need to have C1 entitlement on your driving licence. Those who passed their driving test before 1 January 1997 automatically have this entitlement, but unless they have taken a C1 test, younger family members are limited to the sub-3500kg B category.

So the new DynamicLine aims to offer buyers the kind of comfort they’d expect to enjoy in the B-Class PremiumLine (where just over half of the models are sub-3500kg), but at Exsis-i weight levels (where all models are under 3500kg). The new range also allows Hymer some portfolio housekeeping, by pruning the two B-Class models (678 and 698).

The event had a ‘behind the scenes’ format designed to offer the key DynamicLine programme players the opportunity to explain what they achieved and how they did it. Practical Motorhome met Hymer’s head of design, plus the team leaders for exterior and interior development.

First, though, Hymer’s MD for sales and marketing, Bernhard Kibler, took to the stage to talk us through the B-Class story to date. In a series of interesting facts, he revealed that the B-Class was the first motorhome to have a double floor on an Al-Ko chassis, the first motorhome with a rear garage, and the first motorhome to be voluntarily subjected to a crash test. Little wonder over 58,000 B-Class ’vans have been built since 1981. Today, B-Class and B-Class PremiumLine production accounts for 25-30% of Hymer’s total motorhome output.

Soon afterwards, the B-Class DynamicLine 588 took to the main stage. This Fiat Ducato-based 7m-long four-berth features fixed twin single beds above a garage, with a midships washroom and L-shaped lounge. Joining it was the 444, the cleverer of the two ’vans layout-wise, with its whopping rear kitchen, plus a midships washroom and a front lounge. Anyone who believes that Continental motorhome manufacturers can’t do fully formed kitchens needs to see this.

Although “re-engineered from the ground up” is a tired cliché, in this instance it accurately summarises what Hymer has been up to. Weight has been taken out all over the ’vans, from the chassis, floors, kitchen units, overhead lockers, door frames, handles, hinges, tank insulation trays and more. Methods of joining materials together have been re-thought – using interlocking plastic caps instead of wooden dowels, for example, and fabricating interlocking aluminium profiles to join wooden sections together – all to save time on the assembly line.

The end result is a range of motorhomes well below the 3500kg threshold, and with extremely handy user payloads – 630kg in the case of the 444.

Impressive as they were, these low weights weren’t the only stories at the launch. The DynamicLine also aims to keep the B-Class near the top of the comfort charts, so Hymer took the opportunity to add some thoughtful habitation refinements.

“We worry about our end customers and listen to their needs and desires,” said team leader of interior construction, Hansi Wiest, before revealing a clever innovation in the 444 – a drop-down lounge bed that can be configured to have single beds. Available as an option, it allows occupants of this hitherto transverse sleeping space the same benefits as enjoyed by those sleeping in a permanent version at the rear of the ’van – the ability to visit the washroom in the small hours without disturbing their partner. To support this, a night light – which can be operated from the drop-down bed, as well as from the rear bedroom – is included as standard.

Other comfort-driven innovations include heated dashboards as standard (for both Truma and Alde heating systems), automatic switchover from the radio to the sat-nav system, a total of six zonal speakers (two in the cab, two in the lounge and two in the bedroom) that turn themselves on and off automatically, and sandwich floors that carry integrated wiring.

Safety hasn’t been overlooked, either: daytime running lights, ESP (electronic stability control), Traction Plus and Hill Holder, plus airbags for both driver and passenger, come as standard. The split rear camera affords drivers a permanent rearwards view on the dashboard, where there’s also the chance to have another optional extra – a clever ‘service camera’ that shows the position of the grey water drain relative to a service point or drain on the ground. To empty the tank, you don’t have to leave the driver’s seat: all that’s required is a simple push of a switch on the dash – part of a clutch of essential controls that have been grouped together for optimum practicality.

So how has the look of the B-Class DynamicLine evolved? For an insight into the design process, we joined a presentation by Frank Venter, team leader of design. In all my years of attending leisure vehicle launches, I can’t recall an image of punks being invoked during a presentation, but Frank was all over it. He was making the point that he and his team looked at various trends when designing the B-Class DynamicLine, and punk – previously an edgy sub-culture but now completely mainstream – was one of them.

Apple’s iPhone was also held up as an example of being bold when coming up with something completely new: if Steve Jobs had followed what pure functionality dictated when designing the iPhone, it would have looked like a small plastic slab with outsize rubber buttons. That it didn’t has been the enabler of its success, and also of a whole host of imitators, so Hymer was striving to achieve the same sort of thing with the B-Class DynamicLine.

“The biggest challenge in the design of the new range was not to let the customer see the radical optimisation and weight reduction visually,” said Frank.

Venter and his team visited fashion and interiors shows to look for inspirational trends that would translate well, so that it would be easier to build vehicles for both young sporting couples and ‘well-offs in their late fifties’, as he put it. The team also was also influenced by the impact of the tech and social media giants, and how they continue to miniaturise our daily lives.

In addition, the team focused on the automotive market, something perhaps best seen in the development of the DynamicLine’s front, with its distinctive new headlight. The familiar Hymer logo was made smaller to offer better ventilation for Fiat’s forthcoming Euro 6 engines, but the new headlight is the real star.

Developed after a two-year partnership with lighting manufacturer Hella, this LED-based unit can be used as a daytime running light, position light and main beam. In a feature found in the car market, the DynamicLine’s daytime running light turns itself off automatically when the indicator is turned on. Low and high beam comes from the bi-halogen module, which is also available optionally in a bi-LED version. With its softer light colour, it’s more pleasant to the human eye, plus outlines and obstacles can be better detected. A lot hinged on this new headlight – if its two-year development had been delayed, then the whole B-Class DynamicLine project would have been put back.

Four Hymer B-Class DynamicLine models are available to order now: the two-berth 444 and four-berths 588, 594 and 678. With the exception of the all-new 444, the other layouts already exist in the B-Class PremiumLine range.

Build of the new models starts early in April, with delivery at the end of May or beginning of June. The first builds will feature Euro 5+ engines; the switch to Euro 6 units will start in June or July. We’re told Hymer’s B-Class DynamicLine models will be around €3000 (approximately £2350) cheaper than B-Class PremiumLine.

More DynamicLine models will be released in the autumn, with a RHD version of one of the second batch pencilled in for display on the Hymer stand at the October NEC show. Watch this space!