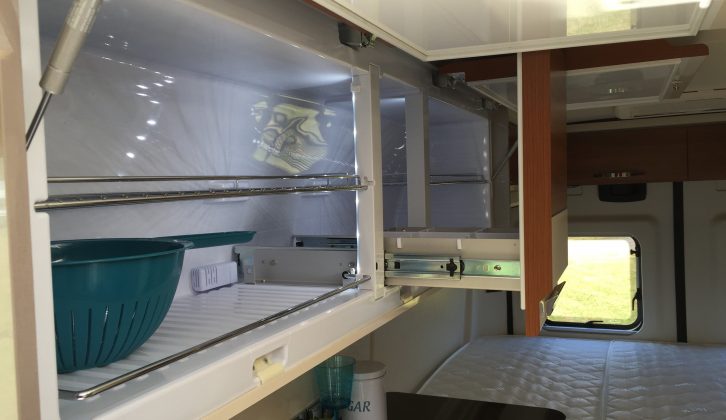 The washroom in this Vantana K60 Fs has a sliding toilet, freeing up extra space for showering while also allowing Hobby to fit larger beds In addition, the T60 H provides occupants with a sociable lounge The A65 GM is the middle-of-the-range Siesta model, with four berths as standard The Fiat Ducato-based Vantana range has grown by two, now boasting seven models, four of which have MTPLMs of 3300kg (the K55 F, K60 F, K60 Fs and K60 FT), the other three coming in at 3500kg (the K65 FT, K65 E and K65 Es). Upgrades to 4000kg chassis are available and all models have four belted travel seats. Layouts featuring rear double beds prevail in the Vantana range, just the K65 E and K65 Es with twin singles. All engines are 2.3-litre units offered in three different states of tune (130hp, 150hp and 177hp), all mated to six-speed manual gearboxes. Two interior trims are available, Ashai Ash with Magnolia Metallic and Karelia Pine with Maroon Metallic.

Models in the Optima De Luxe and Siesta De Luxe ranges are now what Hobby calls ‘full equipment’ ’vans. This means they’re generously-specced as standard, therefore no options are available and there are no hidden costs for buyers. Included in this extensive standard kit list are sat-nav, an adjustable skylight in the cab, driver and passenger airbags, a GRP roof and GRP floor, an extra-wide habitation door, a 150-litre slim tower fridge, an awning, a pull-out gas bottle, and Hobby’s CI-BUS system with a TFT panel which permits you to manage the motorhome’s functions and appliances.

In the ever-expanding panel van conversion market it is great to see genuine innovation and Hobby’s 2017 Vantana has just that. In the kitchen is a 90-litre compressor slim line fridge, mounted in the space you’d expect to find overhead lockers, flanked by cooling compartments. There is also a central extendable drinks compartment. Easy-care stainless steel is used in the kitchen, work surface space has been increased and there’s new ambient lighting running under the worktops.

In addition, the washroom in the Vantana K60 Fs and K65 Es is cleverly space efficient. A new sliding Thetford C 220 toilet liberates extra room for showering; a bonus is that this also creates more space for the beds.

More aerodynamically-efficient and aesthetically-pleasing windows, which also aid insulation, are optionally available on the Vantana range.

The 2017 Hobby Optima De Luxe range features low-profile models but also two compact vans, the V60 GF and V65 GE; four models also have height-adjustable beds. Furthermore, buyers have the option of the De Luxe or the Premium rear panel, the former being smooth and white, the latter two-tone. There are also two interior colour schemes to choose from, Ashai Ash and the lighter Karelia Pine. The De Luxe rear is available on 22 models and 11 layouts, the Premium on 14 models and seven layouts.

All models in the Optima De Luxe range have MTPLMs of 3500kg, with optional upgrades to 3650kg, 4250kg and 4400kg, apart from the T75 HF and T75 HGE which are 3650kg as standard. Swan-neck reading lights have also been added for 2017, these flexible spotlights placed in seating and sleeping areas, chrome-coloured light switches and plug sockets further distinguishing features of new-season ’vans.

New layouts in the Optima De Luxe line-up include the T70 F and the T75 HF, both of which have French beds and end washrooms, the former a 7.38m-long two-berth, the latter a 7.58m-long four-berth with a drop-down double over the front lounge. The 5.99m-long T60 H can now be specced as a four-berth.

The T65 GQ and T65 HGQ are new in the Optima De Luxe Design Line, intended for couples looking for some luxury on tour. Both come in a smidge under 7m and boast plush in-line island beds and split central washrooms. The T65 GQ is a two-berth with an optional third, the T65 HGQ is a four-berth with a drop-down over the front lounge.

Finally, there’s the three-model, family-focused Siesta De Luxe line of overcab motorhomes comprising the A55 GS (three berths with an optional fourth, four belted travel seats, 3500kg MTPLM), the A65 GM (four berths with the option to take this to six, six belted travel seats, 3650kg MTPLM) and the A70 GM (four berths plus the option to go up to six, with six belted travel seats, 3650kg MTPLM). The A55 GS and A65 GM have bunk beds across the rear plus an overcab double, while the largest in the range, the 6.99m A70 GM, has a double bed over the rear garage in addition to the overcab double. And this trio also receives the swan-neck lights and chrome detailing of the new-season Optima De Luxe ’vans.

Speaking to John Hindle from Hobby UK, he’s positive about the 2017-season changes. Specs have been kept largely the same between 2016 and 2017 models, so the 2016 ’vans will continue to be sold. However, as last year’s models use Euro 5 engines, this might mean there are deals around for canny motorcaravanners.

Regarding the 2017 motorhomes, although there’s simply not space in the Vantana to fit an oven, John is confident that most of Hobby’s latest offerings will be able to accommodate an oven, which will appeal to many British buyers. The exception is the Design Line range – at the time of writing, we don’t know if this will be possible. In addition, all models imported to the UK will have the optional 130hp engine fitted as standard.

We also learned that Hobby is planning to increase its dealer network in the UK and to build a network of dedicated repair centres.

A seven-model range of panel van conversions, all with two-berths as standard, a third berth available as an option. All also have four belted travel seats.