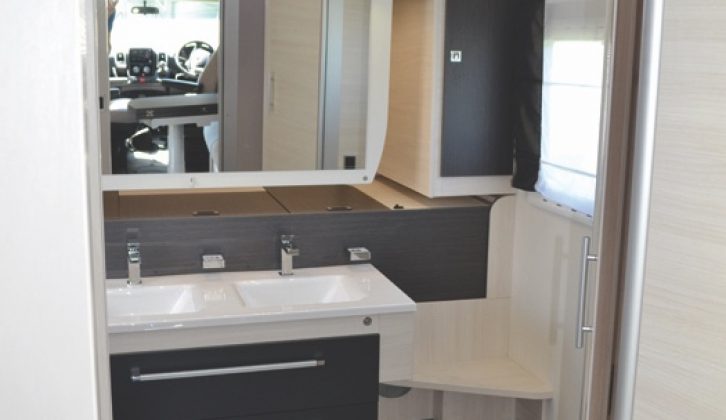 Smart Suite, here in the 778, is designed to present couples with a washroom and bedroom arrangement similar to what they’d find at home Our pick – the 520 has Chausson’s popular Smart Lounge, with a drop-down double, all in a ‘van that is just 5.99m long Cleverly designed collapsible shelf in garage offers versatility in the 520 The 520 manages to include a large end washroom even though the total ‘van length is just 5.99m Chausson enters the 2020 season with a couple of innovative floorplans, and new versions of its best-selling end-washroom Maxi Lounge layouts.

But the new season has also seen it discard its long-established Flash and Welcome labels, and simplify which base level goes with which model. UK-specific van conversions that it launched last year have also been rebranded.

The French manufacturer, one of the biggest brands in the Trigano Group, says that for the 2020 season, it wants to simplify its line-up.

To that end, it has abandoned the Flash and Welcome names. The only special range retained is Titanium – with its silver side panels – in four low-profiles: the 640, and the new 708, 720 and 768XLB. Low-profiles have two equipment levels, VIP and Premium. Overcabs only come as VIP.

All low-profiles will now be available on a Fiat or a Ford base, except the 711 Travel Line, which is only available on Fiat. Titanium models also only come on Ford, with an automatic gearbox.

Over the past few years Chausson, which is 40 this year, has become known for radical designs; and this season is no exception.

The most innovative new model, the 778, includes an in-line island bed at the back that drops down over a rear washroom featuring ‘his and hers’ basins with a large mirror that folds into the base of the bed as it comes down. Along with two small wardrobes either side of the bed, there are two cubbyholes either side of the floor and an Easy Box system behind the basins – a series of flat storage compartments with lift-up lids.

The central washroom spreads across the ‘van. It can be partitioned off either side, and the shower cubicle door can be folded inwards slightly, to make access to the bed easier.

Chausson says the idea behind the new design – called Smart Suite – is to present couples with a 6 square metre washroom/bedroom similar to that which they would find at home.

Chausson also has new additions to its best-selling Maxi Lounge Layout, with a large end washroom and a Smart Lounge in the front. The 630, with drop-down single beds, is retained, joined by three new ‘vans with the same layout and a drop-down double.

The 720 has drop-down bunks in the back, Easy Box storage and a central washroom. It also has a Smart Lounge with three travel seats – something Chausson claims is unique.

According to the firm there is also a unique feature in the one new overcab layout. The 7.46m-long C717GA has fixed single beds in the back, and a dinette, with three forward-facing travel seats behind the cab. Meanwhile, the overcab C656, with bunk beds in the back, gets a new-look washroom, as does the low-profile 767GA.

Chausson has freshened up the interior of its coachbuilts with a new Orfeo furniture finish, darker and greyer than last year’s Malaga. Premium models without Maxi Lounges get a lighting panel below the drop-down bed.

Other changes include 60cm-wide double locking habitation doors as standard on all Maxi Lounge models, while Isofix child-seat points are now standard on all Smart Lounge layouts.

A new fold-out platform designed to make two singles into a double quickly and easily is included in all fixed-single-bed models.

A new infill cushion can be inserted at the top of all island beds to make them longer. This comes as standard on the new 768 XLB (hence the name), and as an option everywhere else.

Chausson launched a UK-specific two-model range, Twist, last year. That name has disappeared already, and in its place comes the 33 Line. Named in honour of the shortest distance across the Channel between France and England (33km), this will initially be a limited edition of two models – the 5.99m-long V594 and 6.36m-long V697.

Chausson has chosen Fiat’s 120bhp engine as standard, with the option of 140bhp. It says the 120bhp offers the same torque as the old 130bhp, but kicks in sooner and lasts longer. It also offers Fiat’s AT9 nine-speed automatic gearbox as an option, including on the V697 van conversion.

Since its inception, the Maxi Lounge has always seemed a great way of making the interior of a motorhome exceptionally comfortable, especially if there are only two of you travelling. Now the 520 means that same comfort is available in less than 6m of ‘van. There’s also a clever collapsible shelf in the garage, which makes what limited space is there very versatile.