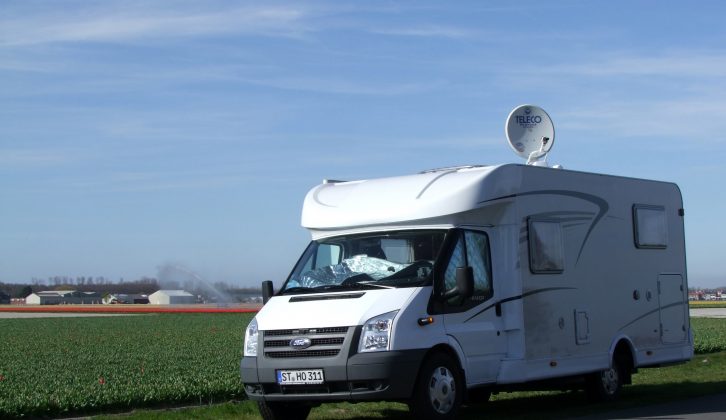 See tulips and spring bulbs in full flower at The Keukenhof Gardens from late April to the first week of May, depending on the weather Bicycles are the best mode of transport in Holland, especially around Amsterdam Roads in Holland incorporate cycle lanes, indicated by a dotted line – it may be necessary to enter them to allow two vehicles to pass in opposite directions Pretty villages, here Megen in Gelderland, are abundant in Holland Windmills and canals are what many tourists expect – and Holland delivers! Big canals and rivers (here, the Maas), flat open landscapes, fields of grazing cows and big skies typify the landscape of the Netherlands Easy on the gears, roads are flat and straight in Holland – here, the impressive Afsluitdijk has turned the Ijsselmeer into a vast lake, separating it from the Waddenzee

Think of Holland and we bet you’re conjuring up pictures of flat, open landscapes, canals, windmills, clogs and cheese. Oh, and flowers – millions of them. Well, yes, Holland has all that and visits to the coastal strip of North and South Holland between Leiden and Haarlem will provide you with these colourful scenes while a trip to Kinderdijk will tick ‘windmills’ off your list of things to see when you visit the Netherlands. The group of 19 windmills there are listed as a UNESCO World Heritage Site. No less, a visit to picturesque Alkmaar in North Holland will tick boxes for Dutch cheeses, canals and windmills.

But what of vineyards, Megalithic tombs, ice-skating and, dare one say it, hills? The Netherlands has all these too. You’ll find Dutch wine produced from the Maastricht vineyards. The River Maas – or Meuse/Moselle as you may well know it better when it flows through Germany and France – travels right through Holland and is surrounded by idyllic countryside. There are also 52 megaliths along the Megalithic Route in Drenthe, one of the least known or visited regions of Holland. If we get a cold winter, head for Holland and join in the hysteria among ice-skaters when the canals freeze over in Friesland for the marathon Elfstedentocht race. And finally, it’s true, Holland really does have hills.

While almost a quarter of the country is at or below sea level, you’ll find hills created by shifting sand in the Hoge Veluwe National Park (in Gelderland Province) and, amid the chalk hills of Zuid Limburg, the Vaalserberg, the country’s highest point on the border with Germany and Belgium.

Though hillsides may be scarce, culture abounds, from the paintings of the Dutch masters hanging in fabulous art galleries, to magnificent and iconic pottery in Delft. There are also fairytale castles punctuated with turrets and towers to see, as well as buildings that are the legacy of a maritime heritage of seafarers and Colonial trade.

Only after seeing all that, can you consider buying a pair of souvenir clogs for your feet!

For the wildest of natural beauty, visit the West Frisian Islands (or Wadden Islands), a haven for wildlife and birdwatching and of great international ecological importance

Holland is cycling mad, with opportunities everywhere from a colourful bike ride through the bulb fields, cycle tours in the cities to conquering the Ijsselmeer Bike Tour, a 250-mile bicycle route. If you don’t have a bicycle, never fear – you can rent one almost anywhere. Better still; pick up one of the free white bicycles that allow you to explore the surreal landscape of the Hoge Veluwe National Park.

Amsterdam is a must for the canals and the culture. Marvel at the street architecture, yes, but don’t forget the not to be missed Rijksmuseum with Dutch masterpieces and the dedicated Van Gogh Museum, brimming with hundreds of works from the famed artist. For poignancy, a visit to Anne Frank’s House is necessary while Hermitage Amsterdam allows you to see incredible exhibits from the State Hermitage Museum in St Petersburg without actually visiting Russia. And, if you really do want architecture, the inner courtyard of the Begijnhof is one for the camera.

It’s only open from mid-March to mid-May each year, but the world-famous Keukenhof Gardens are some of the most colourful you’ll ever see. Set in a 70-acre park, the Gardens are the showcase of the Dutch bulb industry with stunning displays throughout the season. A full day is required to really appreciate everything, including a canal trip through the bulb fields on a Whisper Boat.

For the wildest of natural beauty, visit the West Frisian Islands (or Wadden Islands), a haven for wildlife and birdwatching and of great international ecological importance. Of the five accessible islands Vlieland and Schiermonnikoog are both inaccessible to traffic. Indeed the best option for getting around all the islands, including Terschelling and Ameland, is by bike or on foot. Use the hop-on-hop-off ferry to visit them all. Texel, the largest of the islands, Terschelling and Ameland all have campsites for motorhomes. Dutch residents voted Schiermonnikoog as the prettiest place in the Netherlands.

If you’re touring with children, you’ll have fabulous motorhome holidays in Holland. Visit the Netherlands to enjoy some of the most entertaining family attractions in Europe, including Efteling Theme Park, Duinrell Amusement Park, Drievliet, Slagharen and Hellendoorn. One of the best for children under 12 years is Linnaeushof, southeast of Haarlem. With over 350 play structures, it’s considered to be Europe’s biggest playground. Don’t forget too, the Dick Bruna Huis in Utrecht for lovers of the endearing rabbit, Miffy.

Of all the seasons in the year, the most popular – and the most colourful – time to visit Holland is spring when the bulb fields are in full bloom and the celebrated Keukenhof Gardens are open. The best time to see the fields are from mid to late April when the tulips and hyacinths are at their best, but you should see some colour from mid-March, when the crocuses bloom, to the second week of May as the last of the late-flowering tulips unfold.

Also within spring, on the 27 April, the entire country celebrates King’s Day as a national holiday. There’s an awful lot of orange clothing and orange hair on show, with the biggest festivities taking place in Amsterdam, Utrecht, The Hague and Eindhoven though you’ll find villages having fun too. The Dutch Royal Family makes surprise visits to regional municipalities.

During the summer, residents and tourists alike flock to the sandy beaches along the North Sea. On Flag Day Scheveningen parties with Vlaggetjesdag when the first herring are brought in. You can also see the North Sea Regatta, Holland’s biggest sailboat race, and the Schevingen International Fireworks Festival, held throughout August, which attracts thousands of visitors.

During autumn the Nijmegen Fair, which dates back to the 13th Century, stretches along the riverbank while you’ll find many light festivals keeping at bay the dark days of winter. The Amsterdam Light Festival is one of the largest in the world while you can also see Glow Eindhoven and Candle Night, Gouda.

The most direct route from the UK is the Harwich to Hook of Holland ferry, a seven-hour trip with two sailings per day from Stena Line, including an overnight service. For those living in the north of the UK, the overnight service from Hull to Rotterdam with P&O Ferries may be preferable. These overnight services are especially convenient as you can check in several hours before departure and arrive early morning refreshed and ready to start sightseeing. Cabins are available as a single occupancy to a family of five, though you are not obliged to book a cabin for the overnight crossing on the Harwich route. A Standard Cabin is included in the price of all Hull-Rotterdam tickets.

The alternative is the Dover to Calais (France) route either by Eurotunnel or ferry followed by a two to three-hour drive to the border, depending on your destination. The ring road around Antwerp (Belgium) can become very congested at peak times.

As the Hull and Harwich routes are longer crossings than the Dover-Calais route, the direct services are generally more costly but the overnight service from Harwich to Hook of Holland can work out cheaper if you need to take into consideration loss of work days for travel plus additional fuel.