All three examples share the same classic layout, with the sliding door on the UK offside The Cali’s roof bed is slightly bigger than the one down below (pictured) and it’s only a thin mattress, but it has the added support of sprung slats Kitchens can show wear and tear, but in this model there is no damage to speak of First registered in 2010, this T5 has a 504kg payload and a full VW service history The standard T5 cab includes air-con and heated seats, while cruise control is a key upgrade 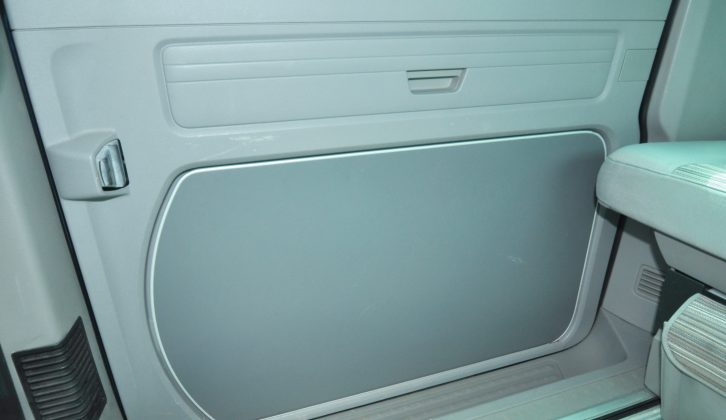 This example is getting on a bit, and there are some signs of wear and tear, especially to the plastics on the sliding door (and cupboard door), where you’ll find some scuffs The added pockets on this VW camper van help up the storage ante, although the colours don’t quite match, but this shouldn’t be an issue for buyers

What is it about the Volkswagen California?

The electric elevating roof? The fact that it’s all made by Volkswagen, to car-like levels of build quality – outside and in?

It’s certainly proved a hit here in the UK, where it is arguably the single best-selling motorhome model.

With most motorhome makers too frightened to reveal production figures, there’s a refreshing honesty to VW’s statement: “Last year we sold 868 California models (616 were California Oceans, the rest Beaches).”

It also adds 2016 was a record year for total California production, with 12,887 of these VW camper vans made in its exclusive factory in Germany.

Here, we’re looking at pre-owned models based on the T5 and dubbed California SE.

Oh, but any California (SE or, now on the T6, Ocean) will also hold its value better than any other camper van or motorhome.

There are downsides, of course. Most obvious is the fact that the conversion isn’t ‘switched’ to right-hand drive – hence the sliding door on our UK offside and the configuration of the internal layout.

Other things to look out for include any damage to the canvas where the roof has caught in the metal supports.

There’s also a well-known issue with ‘corrosion’ of the paintwork on the roof (VW fixes it under warranty, as long as you register the vehicle with it).

The scroll button for the roof/heating/fridge can get damaged by a wayward foot from those clambering down from the roof bed.

All three vehicles here are examples of the facelifted T5 that was introduced in 2010. That also brought new 2.0-litre engines, available in 140PS (138bhp) and optional 180PS (178bhp) variants – the latter features here in all three vehicles.

So let’s take a look at these three VW camper vans for sale at West Sussex-based specialist VW Campersales.

It’s perfect… and so is the price

Like the 2013 example, this is an ex-VW demonstrator with just one other owner and a full VW service history with cambelt change.

There’s not much in it, but overall condition is just that bit better than its newer rival.

In optional Toffee Brown metallic, this has the higher-powered engine but stays with a six-speed manual.

Again, there are some handy extras to add to the attraction, with three-zone air-con and alloy wheels topping the list.

Also, the third floor rail means you could request an additional travel seat.

Thereafter, it all follows the tried-and-trusted VW California SE formula, from the elevating roof (no signs of canvas snagging) to the lightweight, aluminium-edged furniture, to the neat fresh-water tank/gas cylinder holder arrangement.

As far as I can tell, only the hob here gives the game away that this has ever been used as a camper van.

The previous owners were a couple with no children, and that’s borne out by the lack of any damage.

What can go wrong buying a ’van like this? The only thing I can think of is you’ll need to act sharp, before someone else beats you to it!

Not cheap, but just look what you get

The most expensive model here, this example comes with a healthy number of extras, starting with the engine upgrade and automatic transmission.

When new it would have been in the region of £46,000 – some four years on and, still in immaculate condition, it’s lost little in terms of value.

Be prepared for a bit of negotiation, too, because the extra floor rail under the loose carpet section is there to accept a third rear travel seat.

The optional three-zone air-con is a boon, too.

This is an ex-VW demonstrator – which explains a rather pleasing selection of optional extras – that’s had just the one camping owner.

It has a full VW service history and includes details of a cambelt and water pump change.

Otherwise, it all follows the standard format of these VW camper vans.

It really is hard to find anything here, beyond the expected markings on the hob, to show it’s seen any serious use.

But there is a small crack on the front of the drawer section under the rear seat – it will be replaced (and not just fixed) before resale.

Like the other vehicles here, it comes with a six-month, RAC motorhome nationwide warranty.

Some signs of use, but it has a VW service history

It’s probably a bit cheeky to call any VW California SE based on the facelifted T5 a ‘Super saver’, but this example had just come back for a second time to VW Campersales and was still awaiting a full clean-up.

To start, there are some signs – scuff marks and slight damage to a lower cupboard door, for example – that show this has had a bit of family use.

A few details elsewhere (including the faintest of snags on the roof canvas) will be repaired before this is sold on.

There’s certainly nothing major to worry about, and a whole lot less than you’d expect to find in a car, for example, of similar vintage.

It’s very much the standard, untouched T5 VW camper van, happily free from the DIY that can all so often diminish the value of any motorhome.

Even the storage pockets, from Brandrup, are a recognised California accessory (but note there’s a slight colour mismatch).

The bike rack is a VW-fitted option, the towbar an aftermarket addition.

You’ll need to act sharp, before someone else beats you to it!