The Hillside Birchover’s cab is basic, with no air-con, a standard stereo and steering wheel and a five-speed gearbox The Birchover’s kitchen has the standard campervan two-ring hob, while the sink unit has Hillside’s trademark front door to the fridge and grill Adria makes the most of the Twin’s kitchen space, with a proper three-way fridge, grill, two-ring hob and separate sink Unlike most campers, the Adria Twin has a washroom with a sink, toilet, shower and window behind a space-saving tambour door 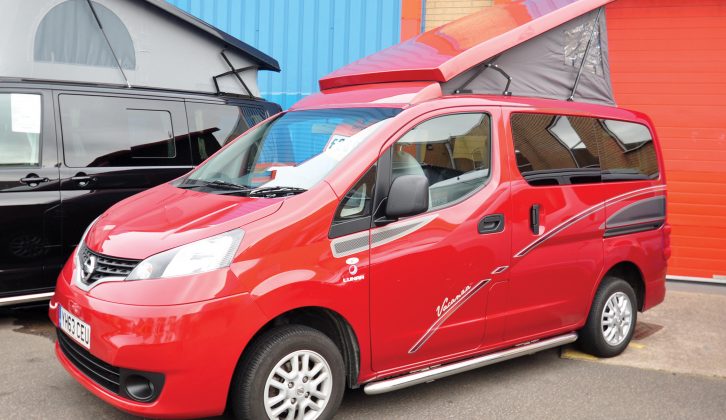 Based on the 1.3-litre turbodiesel 89bhp Nissan NV200, this Lunar Vacanza is in excellent condition Cab seats swivel to form the lounge, but legroom is restricted in the Vacanza The galley kitchen has a three-ring hob and sink, compressor fridge, grill, and more worktop than you’d expect If the motorhome market is doing well (which means strong sales of new and secondhand ’vans, as well as increased visitor numbers at shows and so on), then it’s the campervan sector that’s a major driving force.

Whether it’s off-the-shelf campers, or conversions added to used vans (especially Volkswagen’s Transporter), both  are services provided by Derby-based Hillside Leisure. It’s one of a number of companies that have risen to the top as the whole market has strengthened.

Indeed, there’s a pretty amazing choice of campervan converters out there at the moment, ranging from companies like Devon and Leisuredrive, and even Danbury, with roots going all the way back to when things really started taking off in the 1960s.

Others include Auto-Sleepers, with more than 50 years’ experience in campervan conversions – mainly via its VW-based Trident and Trooper models; and Bilbo’s, which has truly mastered the craft of campervan production, also with a host of Volkswagen models.

Note that we’ve used the term ‘campervan’ here. We’re happy to define this as a vehicle designed for camping as well as daily-driver duties, but where the conversion typically stops short of the full shower and plumbed-in toilet facilities offered by larger vehicles. We admit that it’s a somewhat random definition (and you may have your own views), but it’s an attempt to draw a line between a campervan and a full-on motorhome.

Was it really only 12 years ago that Hillside took its first, but far from tentative, steps into the campervan market? It’s certainly made the most of its opportunities since then.

Brothers Adrian and Mark Cross set up Hillside Leisure in 2004 and were joined some three years later by third brother David. There’s more than a degree of modesty when they refer to themselves as part of “probably the fastest growing compact campervan manufacturer in the country”.

Today, the portfolio spans a series of base vehicles: Volkswagen Transporter, Renault Trafic, Nissan NV200 and, the most recent addition, Ford’s Transit Custom (see our Hillside Castleton review). It even claimed a world first when it announced an electric, zero-emissions version of its Dalbury, using the Nissan e-NV200 as its base.

There’s certainly not much sign of compromise here. Hillside is the UK’s largest customer for elevating roofs from Germany’s SCA, often supplying other converters.

It also uses RIB rear seats from France’s Scopema. Plus, as well as fitting Eberspächer heating units to its campers, it has also devised a bespoke hot-water system.

The proof of the pudding is in the eating, of course, and it’s nice to see that Hillside is more than willing to get out there and try the campervans they make for themselves.

Ron Liversedge, a key member of the sales team, says: “Our pre-owned campers come with a one-year warranty underwritten by AutoProtect. That means it can go to any VAT-registered garage in the country for repair work.”

When you visit Hillside Leisure in Chequers Lane, Derby, you’ll find new and used micro and compact campervans for sale. This is also the manufacturing premises.

At Hillside Leisure we found a good-as-new 2012 Hillside Birchover for sale at £31,995. These are based on a Volkswagen Transporter T5 T28, with a 2.0-litre turbodiesel, 100bhp engine. This example was first registered in 2012 and has 61,470 miles on the clock. It has four belted seats for travelling and sleeps up to four people. This compact campervan measures 4.89m long, 1.9m wide and 2m high. The MTPLM is 2800kg and the payload is estimated at 550kg.

Volkswagen camper conversions are where Hillside cut its teeth, with the Birchover being the mainstay of the range. But, as well as producing all-new campers, Hillside also buys up late, pre-owned VW Transporter vans and gives them a complete change of life with a new conversion.

This is a typical example: a previously owned Transporter that’s been used as a commercial vehicle, before having a conversion added last November and now looking for its first campervan owners.

Inside, there are the greys of the Puntinella furniture finish and Volkswagen’s own Tassimo upholstery, which will prove extremely hardwearing. There are other Hillside hallmarks here, too: the hinged front to the fridge and grill, plus the cutlery tray under a flap in the worktop.

This camper also has Hillside’s preferred fittings of SCA elevating roof, Eberspächer heating plus a hot-water system to Hillside’s own specification, and a rear RIB seat for two.

It’s the facelifted VW T5 base vehicle, so you get a more refined, 100bhp 2.0-litre engine, but only a five-speed manual gearbox.

Even if you don’t fall for this particular example, there are plenty more where it came from.

So, to sum up, what are the pros and cons of buying a 2012 Hillside Birchover campervan?

Based on a Fiat Ducato with a 2.3-litre turbodiesel, 100bhp engine, it was first registered in 2007 and has travelled 53,800 miles since then. It’s a three-berth, with four belted travel seats. Easy-to-drive, it measures 5.99m long, 2.05m wide and 2.58m high. This example comes with desirable extras – an awning, reversing sensors, Blaupunkt stereo and cruise control. The Adria Twin has an MTPLM of 3300kg and payload of 595kg.

It might have a plain-looking exterior, but Adria’s Twin sparked a revolution across Europe. How? By offering up a floorplan in a Fiat Ducato van conversion that provided a convincingly comfortable transverse double bed at the back, as well as a lounge with travel seating for four.

The fact that Adria also squeezed in plausible kitchen and washroom facilities meant that it was onto a real winner. They all help elevate the Twin above mere campervan status.

This example is basic, with no air-conditioning or passenger airbag, but the previous owner has gone for a Blaupunkt stereo system as well as aftermarket cruise control. There’s also a DIY attempt at a TV holder.

This is a sought-after vehicle on the pre-owned market, thanks to its relatively compact overall dimensions. That’s something which is reflected in the price, too, even though this example has only the basic 100bhp engine.

There’s plenty of practicality here, though. The rear bed can be hinged up for more living/luggage-carrying space, and the tambour door to the washroom saves room.

Unlike more recent Adria Twins, the conversion is switched for the UK, so the sliding door is on our nearside.

So, what do we like and dislike about the 2007 Adria Twin?

Based on the Nissan NV200 with a 1.5-litre turbodiesel,  89bhp engine, this Lunar Vacanza was first registered in 2013.  There are just 16,697 miles on the clock and inside you’ll find two berths and two-to-four belted travel seats.

This campervan is just 4.4m long, 1.7m wide and 1.96m high. It comes with some desirable extras, because the first owner bought the Luxury Pack, a towbar and electrics and blown-air heating. The Lunar Vacanza’s MTPLM is 2000kg and the payload is 322kg.

A genuine micro-camper, this, rather than the full car-camper that Lunar wanted us to believe it could be; although the company does deserve credit for latching onto the Nissan NV200 as a base vehicle for a particularly cute camper.

With new production now ceased on Lunar’s Vacanza (subsequently called Camper Car), you might want to keep your eyes peeled for whatever turns up on the pre-owned market.

Although the Vacanza has four individually belted travel seats, it is so small that it can only ever qualify for two-plus-two use, at most. Meanwhile, that bed in the raised roof, at 1.36m x 0.91m, is really only for smaller children.

This Vacanza has had one owner, and is fitted with the £1499 Luxury Pack (leather, Porta Potti, TV socket, external mains socket, carpets, running rails), a Truma water heater (£699) and a towbar/electrics.

To sum up, what are our likes and dislikes for the 2013 Lunar Vacanza?

Vehicles featured here are viewed and reported on as seen. Bear in mind that this is usually before any base-vehicle and habitation servicing, including any rectification work, before they go on to their next owners. Dimension and payload figures refer to official measurements before the addition of any extras, unless stated otherwise. To see many more campervans and motorhomes for sale, all over the UK, click here. Call ahead before making any visit to see a featured vehicle. Stock shifts fast!

Nick’s first caravanning memory is his younger brother falling out of the bunk bed above him. That was over half a century ago. Around a decade later, his first driving experience was taking the family campervan across a field on his uncle’s farm. He’s now well into his fourth decade as a journalist specialising across the whole leisure vehicle sector. In that time, he’s worked for a wide variety of publications, testing literally thousands of vehicles and visiting almost as many different places throughout the UK, Europe and even beyond. These days, he’s never happier than when he’s out reviewing new or pre-owned motorhomes or researching and writing touring articles for Practical Motorhome. Or, failing that, you may well find him pitching near you in his latest campervan, a Volkswagen California (more often than not with his short, suffering partner, Lin, and crazy sprocker spaniel, Bonnie).