A compact camper is a sensible choice for your first tour – but with three kids and an autumnal chill in the air? The second surprise was a trip to Legoland – a thrill for children and parents alike! It’s time for the kids to get their Legoland driving licences! 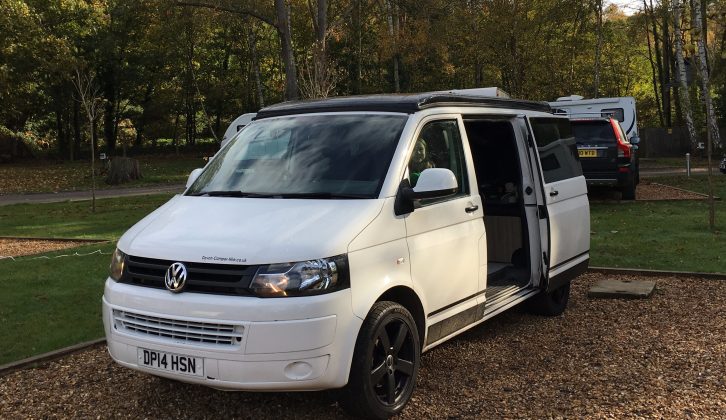 Picturesque Hive Beach, near West Bay, was another stop on the drive back home to Devon

Five days into half term and the kids are already starting to get restless.

Their brains have been numbed by mindless cartoons on a never-ending loop.

Their imaginations have long since given up trying to find ways of entertaining themselves which don’t involve hitting a sibling with a cushion, toy or blunt object. They’re bored.

There’s a mounting feeling that we need to ‘do something with the kids before they go back to school’.

Luckily, a plan is already in place.

The secret to success

“We’re going on holiday with Boris,” I announce proudly to them on Thursday morning over breakfast.

My wife Katie and I have been secretly planning a getaway and have packed a few bags overnight without the kids knowing.

“Who’s Boris?” is the reply from three confused children, whilst mentally assessing whether an unexpected trip away is worth missing the same four episodes of Pony Patrol, or whatever their latest craze is called, seven times.

Boris, of course, is a VW camper van. He is rented out (along with his identical twin, Bertha) by my good friend Matt at Devon Camper Hire.

Living in Devon, as we do, camper vans and motorhomes are a familiar sight all year round.

They plough up and down the A30 heading for the coast, and are the vehicle of choice for anyone locally who likes to catch a wave on the weekend.

Having never driven, owned or rented one before, the idea of escaping for a short break in one with the kids is appealing.

Even if it is late October.

Five in a VW camper van?

When I first pitch the idea to Matt a few weeks earlier, he’s hesitant.

“Err, we’ve never had five people stay in one before,” he hints.

“But there are five seats and seatbelts, right?” I ask.

“Well, yes, but will all three kids fit in the pop-top to sleep?”

“I’m sure we’ll make it work,” I say with my typical blend of optimism and stupidity.

“Just don’t turn up with too much stuff,” says Matt. “There won’t be room.”

With hindsight, I can now see that the boot of a large 4×4 filled to the brim is exactly what Matt meant by “too much stuff”.

This becomes quickly evident as we attempt to cram two adults, three ear-splittingly excited children and far too many bags, duvets, suitcases and backpacks full of soft toys into the camper van on Matt’s driveway.

With much wedging, squashing, squirrelling away and hasty slamming of doors to constrain the luggage tidal wave, we finally manage to get everything into Boris.

With Emma (9), Lucy (7) and Thomas (4) strapped in, partly for their safety and partly to reduce the chances of them exploding with the anticipation of it all, we set off just after midday on our first camper van adventure.

Being in the West Country already, it doesn’t seem enough of an expedition to just follow the VW camper van crowd heading for the Cornish coast, so we drive in the opposite direction, heading up the A30 towards the Home Counties.

The non-stop excited babble amongst the junior passengers gradually drops to a steady happy chunter and we begin to enjoy the journey.

Behind the wheel, Boris doesn’t feel much different to drive to our 4×4.

He handles well, feels a manageable size and is nimble enough to be enjoyable to drive at a leisurely, holidaymaker sort of pace, whilst also allowing the odd dart along the overtaking lane to glide easily past trucks.

Unlike our normal modes of transport, Boris comes with the added benefit of ensuring you get a cheery wave or two from other VW camper van drivers heading in the other direction.

By mid-afternoon, we arrive at our destination, a leafy site beside a small lake just outside Wokingham in Berkshire.

After grabbing a bite to eat at a nearby restaurant with some old friends who live in the area, we hook the ’van up to the electric and set about trying to remember what Matt showed us about turning the front chair around, folding the bed down in the back and turning on the gas to make a brew.

With warm pyjamas donned, the three kids are finally shoehorned into the pop-top roof’s bed.

We make a mental note not to feed the kids anything too nutritious over the weekend for fear that a sudden growth spurt from any one of them may take it from ‘cosy’ to ‘cramped’.

It’s snug – both up top and down below – but it works. Other than a couple of unintended elbows in the face during the night, we all sleep surprisingly well.

Now, I know what you’re thinking, choosing to head off for your first camper van holiday with one child too many in late October when the nights are getting chilly, is mad. At around 6 the following morning, we were in complete agreement.

It gets pretty cold in a ’van at that time of year, it turns out, particularly when you’re parked by a lake!

Noses, feet and any other extremities which had unknowingly broken cover during the night took a while to return to a normal temperature.

However, a warm shower in the campsite washblock, a cuppa boiled on the hob and an extra jumper all round soon fixed the problem.

We’d all slept pretty well and, given a day trip to Legoland was on the cards (another surprise for the kids), excitement levels were back at DEFCON 5.

The kids had forgotten why they were ever upset at missing Pony Patrol completely by this point.

Boris was converted back into a mode of transport with about 20 minutes of effort. And I remembered to disconnect the electrical hook-up before driving off. Just.

A day of thrills at Legoland followed and, after staying to watch the half-term fireworks, it was gone 9 before we returned to the campsite that night with three exhausted kids and two even more exhausted parents absolutely ready for some shut-eye.

Oh, how I wished at that point for a magic ‘automatically make Boris into a place to sleep’ button.

Unfortunately, he isn’t equipped with one and so, after some more huffing and puffing, the beds were made up and we all collapsed into a deep sleep the moment our heads hit our pillows.

Having seen everything we’d come to enjoy in glorious Berkshire, after a hearty breakfast cooked in the ’van, we headed back west to a campsite on the outskirts of Weymouth, overlooking Chesil Beach and Portland.

We treated ourselves to a lazy afternoon wandering around the lighthouse at Portland Bill before retreating to the campsite for a meal and a good night’s kip with the lights on the Isle of Portland twinkling merrily out the side window.

It was only at this point that we remembered the fan heater which Matt had kindly left in the storage compartment under the passenger seat.

Kicking ourselves for not using it the two previous nights, we set it running to warm the VW camper van up before we settled down for the night.

As a result, we had the best night’s sleep of the three we spent in the ’van.

Next morning, after breakfast, we set off for a spot of fossil hunting on the beaches of the Jurassic Coast and a wander around West Bay, before it was sadly time to take Boris back home to Devon.

The start of something new?

We handed Boris back to Matt just as the sun was setting and reported the trip as a roaring success.

The ’van had another 450 miles on the clock and hadn’t missed a beat. He also wasn’t trailing an unwanted electrical hook-up cable behind him.

We’d proved that it is possible to squash three kids into a camper van’s pop-top and get them to sleep.

We’d also discovered that, contrary to what you might think, you can have a good family holiday in a camper van in late October. Especially if you remember to use the heater to stay warm.

Would we do it again? Absolutely. Although we’d probably go in the summer next time.

If we don’t, whichever kid gets the short straw and has to sleep outside in a tent in October is going to hate us forever.

We attempt to cram two adults, three ear-splittingly excited children and far too much kit into the VW camper van Compact Motorhomes: why small is beautiful How to go off-grid